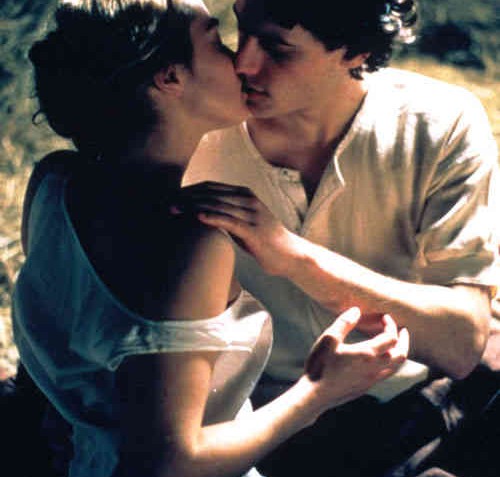 Solomon and Gaenor is a first feature film for writer/director Paul Morrison, a documentarian crossing over to romantic drama. Morrison brings a fine director’s eye to this production; the experience of his earlier filmmaking shows in his knowing use of landscape, lushly saturated color kept to carefully limited hues, and an eye for telling, revealing detail. Unfortunately, as beautiful as Solomon and Gaenor is to the eye, and despite fine performances, the drama never quite takes wing.

Against the background of bitter strikes by Welsh miners prior to World War I, Morrison sets a Romeo and Juliet tale: Solomon (Ioan Gruffudd), a young Jew from a pious family, meets Gaenor (Nia Roberts), a not-so-innocent girl from a pious Protestant "chapel" family of miners. From the first, Solomon conceals his Jewish identity, passing himself off as Sam Livingstone. He’s aware of prejudice against Jews amongst his Welsh neighbors, though his family believes they have come to a more accepting place than their east European origins. Hard economic times, though, lead to community frustration and anger; the love story unfolds against a growing hostility toward Jews – the perennial scapegoats of Europe.

Morrison’s exposition is unhurried. He makes the meeting and the step-by-step courting of his lovers seem real – in their awkwardness and in their secrecy and fear of discovery. Both of the families and their family rituals are depicted, providing a context for the doomed romance. Morrison subtly lets his observant camera disclose similarities as well as differences in the mores of these different religious/cultural heritages.

Gruffudd, a charismatic actor who shone in the BBC’s Great Expectations, continues to impress; he projects ample charm while conveying both the conflict and the passion of young Solomon. Roberts, in her first leading role, is equally convincing.

After the promising beginning, though, the film treads a too slow and fatally predictable path. That each lover would be an unacceptable mate to their respective families and the family reactions when they learn of the liaison hold no surprises. And Morrison is ceaselessly earnest in telling his story, with hardly a moment of comic relief, and no unexpected quirks or twists for contrast or insight. The impending tragedy looms ever more obviously and, for all its sincerity, the film slips into melodrama, obviating the possibility of genuine sympathy for the hero and heroine.

Solomon and Gaenor is an unfortunate miss; the total equals considerably less than the sum of its admirable parts.