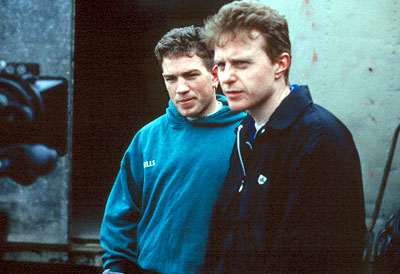 Southpaw is a sane and modest movie. In this no-nonsense documentary about a young Irish boxer, director Liam McGrath seems to have taken the simplicity of his subject to heart, and given us an engaging and resolutely unassuming picture.

Southpaw covers two years in the life of Francis Barrett, an amateur boxer who at 19 found himself representing Ireland in the 1996 Olympics in Atlanta. The achievement was an act of nearly pure willpower, as Barrett is a member of the Travelers, an indigent squatters community that travels about in caravans, parking their motor homes wherever they can. At the time that Southpaw was filmed, Barrett&#146;s family lived with sixteen others on the outskirts of Galway in a rustic encampment that had neither electricity nor running water. Barrett converted an abandoned trailer into his gym, and it was there, with a dilapidated punching bag as his only piece of equipment, that he made himself into an Olympic boxer.

Southpaw has a light touch, and just glances over the details in Barrett&#146;s life: his various bouts, his marriage (in a triple wedding ceremony), his decision to leave Galway and move to London for a better shot at a title. It doesn&#146;t push Barrett&#146;s straitened circumstances at us; it doesn&#146;t need to, for his impoverished background is apparent in almost every shot of the movie. And it doesn&#146;t harp too much on the widespread social prejudice against the Travelers, instead conveying it with a choice detail or two. (A Galway City Councillor at one point suggests that they be made to wear dog tags.)

The film pays most of its attention to Barrett&#146;s relationship with Galway barber Chick Gillern, who is a story in his own right. Gillern won a series of boxing titles as a young man, and now in his sixties he operates the Olympic Boxing Club, so named because it was founded on the principles of equality and fraternity that underlie the Olympics. The club only initially had a permanent home; since then, it&#146;s been a vagrant organization, lodging wherever it can. Barrett began training with Gillern when he was nine, so it&#146;s a bittersweet experience when Gillern must watch by television as his young charge slugs it out on the Olympic stage &#150; you can sense just how badly he wants to be in Barrett&#146;s corner. After Barrett moves to London, he falls under the wing of Luigi Leo, a much younger man who seems better positioned to further his career. In one pre-fight sequence, Leo graciously (and wisely) holds himself aside as Gillern, who is visiting London, gives his one-time surrogate son a final pep talk.

That kind of restraint is evident throughout Southpaw. Even its sense of lyricism is understated, down to the acoustic guitar that serves as mood music behind some of its scenes. If we don’t understand the significance of every bout, or if we don’t get to know the members of Barrett’s family as much as we’d like to, McGrath seems to think it ultimately doesn’t matter. Southpaw doesn’t try to find any psychological undercurrents in its subject; it doesn’t care what makes Francis Barrett tick. Rather, it’s content to poke one hand in the air on behalf of an obscure man and his acquaintances, as if to say, "We are here." It’s a film that doesn’t go into detail, but valentines don’t have to.

(9670)
$2.84 (as of January 23, 2021 - More infoProduct prices and availability are accurate as of the date/time indicated and are subject to change. Any price and availability information displayed on [relevant Amazon Site(s), as applicable] at the time of purchase will apply to the purchase of this product.)