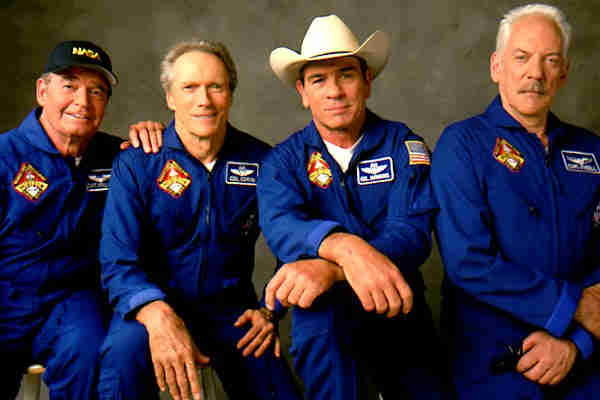 On the surface Clint Eastwood&#146;s Space Cowboys looks like a frivolous chemistry experiment: What will happen if four dissimilar icons are squashed into a single motion picture and have to meld their styles together? Working overtime, Eastwood not only defuses this landmine but redeems a cliche-riddled script that has no business working half as well as it does. Space Cowboys has a humming surface and a grown-up sweetness &#150; it&#146;s a kiddie movie for adults.

Eastwood, Tommy Lee Jones, Donald Sutherland, and James Garner play the members of Team Dedalus, a flight-test crew ignominiously dumped from the higher echelons of jet-testing in the dawn of the Space Age. They&#146;ve drifted away from each other over the years, but when a defective Russian communications satellite called IKON threatens to crash into the earth, NASA turns for help to retired Colonel Frank Corvin (Eastwood), the man who designed IKON&#146;s antiquated guidance system. Once Corvin convinces the brass that IKON can only be fixed in space, he&#146;s in position to blackmail NASA into letting him fulfill an old dream: to lead Team Dedalus into outer space. NASA agrees, but only on the condition that the mission will be scrubbed if Corvin and his team can&#146;t keep up with the training regimen of the younger astronauts who are to accompany them on the space shuttle.

But the training is only one of Team Dedalus&#146; many worries. An old nemesis from their Air Force days is now the director of NASA (James Cromwell), and he&#146;s working behind the scenes to queer their chances of success. Corvin&#146;s co-pilot, &#147;Hawk&#148; Hawkins (Jones), begins falling in love with the mission director (Marcia Gay Harden). One of the most likable members of the team is suffering from an inoperable disease and may have to give up his seat on the shuttle. And the mystery of how an American guidance system found its way into a Soviet-era Russian satellite takes on increasingly ominous implications.

Space Cowboys&#146; ads make it look like a string of Geritol jokes, and God knows it has plenty of &#147;Ripe Stuff&#148; gags, not all of which are as funny as Sutherland&#146;s eyeglasses that look like parts from the Hubble telescope. But instead of treating the men as Cocoon-type husks whose vitality has been depleted, the movie is built around the idea that they&#146;re as alive as they&#146;ve ever been, and that if anyone is washed up, it&#146;s the tired bureaucrats and brown-nosing young astronauts that surround them. And Space Cowboys knows that there&#146;s more to comedy than horselaughs. When Team Dedalus makes a PR stop on Jay Leno&#146;s show, the leathery fly-boys josh each other on national TV about their undiminished sex drives, while Harden is seen watching the show from her bed, nearly purring as her guys charm America senseless. The scene&#146;s double-dip of good vibes feels like a great massage.

Eastwood gives his trademark glare whenever the brass suggests that he&#146;s not a team player, but otherwise his performance is an act of self-effacement: he doesn&#146;t block our view of his co-stars. There&#146;s not much to block when it comes to James Garner, though. Once Garner&#146;s character is introduced (he&#146;s a Baptist preacher who abandons his tiny flock for the mission), he doesn&#146;t really do anything except carry the little hula-girl doll he&#146;s had since his Air Force days into space. Why didn&#146;t the writers make Tank Sullivan the team&#146;s most articulate member, tossing off the droll asides that Garner built a career on? At least they paid attention to Donald Sutherland&#146;s old movies, for Jerry O&#146;Nell is the same kind of giddiness-inducing rebel that Sutherland played in Kelly&#146;s Heroes. But ultimately Space Cowboys is a Tommy Lee Jones movie. Jones has the same electric swagger that he had in The Fugitive (when he comes onscreen, you can feel the audience perking up in its chairs), and here his little shivers of melancholy make Hawk the most interesting member of the team. With his Texas accent, direct gaze, and natural acting style, Jones makes you realize what a relative notion &#147;charisma&#148; is. Even Clint Eastwood looks constipated next to the man.

For all its good humor, Space Cowboys still might have been a chore to watch if not for the restraint and surprising gentleness shown by Eastwood the director. The movie has its lapses, including a draggy midsection and what has to be the least involving blastoff sequence ever put on film, but Eastwood pulls the movie together once his crew gets into space. He doesn&#146;t let Space Cowboys&#146; impressive special effects overwhelm his characters, not even when IKON is breaking apart and its pieces are shattering against the space shuttle&#146;s cockpit. Instead of pulverizing us with music and sound effects, he offers a fresh vision of space flight and unexpected surprises such as IKON&#146;s set design, a witty piece of work that makes it look malevolent and junky by turns.

Eastwood saves some of his best efforts for a long sequence that culminates in a reversal of Slim Pickens&#146; apocalyptic, wahooing A-bomb ride in Dr. Strangelove &#150; in Eastwood&#146;s hands it becomes a majestic affirmation. And he tops himself in the movie&#146;s closing moments when his camera finds the sanest, most memorably tranquil image in his long career. Like Frank Corvin, Eastwood minimizes his handicaps and saves the day with some easy-going professionalism. And like Team Dedalus, we realize that the best things often come just when we think the ride is over.