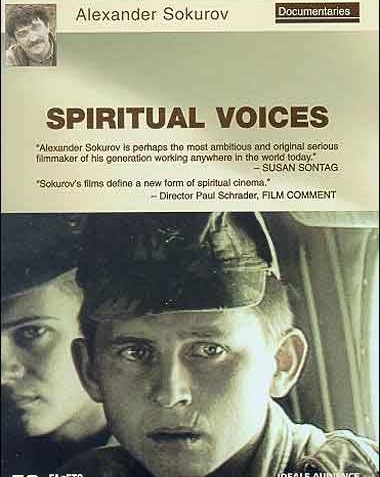 When it comes to war documentaries, Russian filmmaker Alexander Sokurov doesn&#146;t exactly leap to mind. Sokurov, a disciple of the great director Andrei Tarkovsky, has made a career out of experimentally slow-moving film work that maps the human condition in miniature.His best films, like 1997&#146;s Mother and Son, reduce their narratives down to the most elemental&#151;like the sound of seagulls at the beach or a shot of a mother and son in an embrace.Typical of Sokurov, the first part of his war documentary&#151;sub-titled &#147;From the Military Diaries&#148;&#151;opens in abstraction.This takes the form of a 30-minute time-lapse long shot of a desolate plain shifting through the seasons.Over this, Sokurov&#146;s narration describes the unhappy death of Mozart.Formally, this is as far afield from Saving Private Ryan as one can get.

Filmed over several months in 1994, Spiritual Voices finds the director camped with a Russian infantry unit along the border between Tajikistan and Afghanistan. Though Russia had dramatically pulled back military operations in those countries after the collapse of the Soviet Union, some places had retained outposts for administrative policing duties. But Sokurov isn&#146;t interested in geopolitics. At roughly five and a half hours, this should be an exhaustive examination into the lives of young soldiers.Instead, it settles for exhausting, as Sokurov trains his camera on the rugged, merciless terrain and the offhanded ways in which the soldiers try to while away the hours.

Unlike Sokurov&#146;s superior portrait of Russian naval soldiers, 1998&#146;s Confession, which used the cramped interiors of a ship to effectively show the dreariness and solitude of this life, Spiritual Voices never manages to portray its quotidian aspects as meaningfully as its director intends.Sokurov&#146;s father was a lifelong solder in the Soviet army, so it&#146;s understandable that these documentaries reveal a warm, often touching respect for the details of military life.Part 2 involves a treacherous hike through the mountains to a remote bunker, and the feeling of camaraderie carries through to Part 3, which gives snatches of dialogue and conversation (as with Confession, much of the dialogue goes un-subtitled) as the soldiers wait out their tours of duty. (One poignant moment involves the regiment saying goodbye to a young man who gets sent back home after a two-year stint.)

For the rest of the border guard, the waiting game soon ends as well, though for different reasons.Part 4 begins with gunfire, and immediately follows the men as they seek shelter in the bunker. Under heavy shelling from the surrounding hills, Sokurov&#146;s camera jostles and shakes, breaking the spell of his usual poetic reverie in a moment of spontaneous peril.For twenty minutes or so, the film is re-charged by a riveting sense of danger that&#146;s at once out of place (it feels more like an outtake from Gunner Palace) and to the film&#146;s overall benefit.Once the firefight has settled down, in a solemn scene in which a turbaned rebel is viewed from across the river coming out of his house and waving a white flag, Sokurov manages to hold on to the metaphoric content more sharply.Part 5, which centers around the camp&#146;s meager New Year&#146;s celebration the following day, opens with a lengthy shot of a literal bird on a wire.