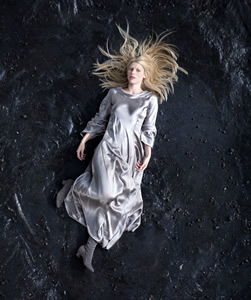 magic?After watching Stardust, I would say that it is difficult, but it is

By use of a soothing “once upon a time” narration by Ian McKellen, dreamlike

and otherworldly locations in Scotland and Iceland, a charming performance

capture some of the spirit of an enchanting fairy tale, and at the same time

Stardust is the story of Tristan Thorn (Charlie Cox), a young Englishman

from a rural village, who, in order to win the hand of the local beauty

(Sienna Miller), promises to bring her a fallen star.To accomplish this

quest, he must cross the cobblestone wall that for hundreds of years has

protected his quiet town, and venture into the magical and perilous realm of

The fallen star has turned into a spirited young woman, Yvaine, (earnestly

as promised, Yvaine is being hunted by powerful foes—the King’s (Peter

O’Toole) devious and murderous sons, who each are vying for Yvaine’s secret

powers to secure the throne for themselves, and a diabolical witch (Michelle

Pfeiffer), who must cut out Yvaine’s heart and eat it in order to gain

On their dangerous journey, and as they race to evade their evil pursuers,

unicorn, among other magical occurrences.Ultimately, Tristan learns to

survive on his wits, discovers the meaning of true love, and uncovers the

astonishing secrets of his own identity.Spoiler alert: they live happily

Michelle Pfeiffer puts on a great show as the wicked witch, aided by

whenever she appears.Robert De Niro’s pirate captain is extremely

entertaining, if a bit broad and disconnected to the rest of the film.He

seemed to be enjoying the role while (metaphorically) winking at the

audience.Pfeiffer’s and De Niro’s larger than life performances will

As a film, Stardust is caught in the middle by trying to retain the small

expectation of Hollywood hoopla.This is a tough place to be.In fact, at

times, it feels as though we are watching two distinct films…the first, a

tender fable of the search for love and acceptance, and the second, a

*Neil Gaiman’s novel, Stardust, Being a Romance Within the Realms of Faerie,

that are reminiscent of some of Dante Rossetti’s illustrations.Gaiman is