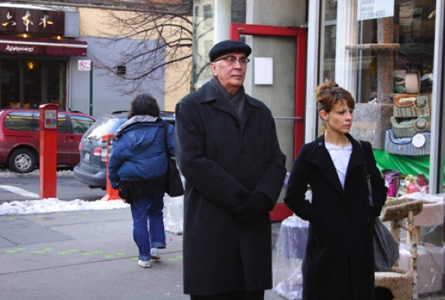 Fifteen years ago, I saw the actor Frank Langella perform for the first time, at the Mark Taper Forum in Los Angeles. He was playing opposite Juliet Stevenson in a production of Howard Barker’s “Scenes from an Execution” and his exceedingly tall frame and loose physicality took command of the stage. Brazenly dressed in a tailored yellow suit, he strutted across the stage like a spark of virile arrogance and male sexual energy. He was a stallion, uncontrollable and a little frightening, and to put it bluntly, absolutely arousing.

And now, fifteen years later, Frank Langella plays an old man with a heart condition in Andrew Wagner’s exquisite chamber drama “Starting Out in the Evening.” The contrast is startling, not only because Langella’s character in the movie is poles apart from the one he played on stage, but also because of the way he plays him, with so much stillness from someone I remembered as all movement. And yet, it’s a stillness that reverberates with a similar strength of conviction, intellectual energy and a wellspring of passion, however muted by age and an intellectual’s reserve. As he did on stage so many years before, Langella ignites these qualities with their own sexual power.

Langella plays Leonard Schiller, a retired professor and novelist whose fame as a writer has long diminished. His four previous novels are out of print, and he’s been doggedly working on a fifth for over a decade. Leonard Schiller is one of a dying breed, the New York Intellectual, a contemporary of the likes of Saul Bellow and Lionel Trilling, whose influence made New York a vibrant literary and intellectual epicenter. Andrew Wagner’s drama suggests that not only are Schiller’s days of glory long gone, but so, too, are the days when literature was a celebrated cultural phenomenon.

Leonard seems to be steadfastly heading towards death with graceful resignation when a young graduate student suddenly enters his life. A devoted fan of his work, Heather Wolfe (Lauren Ambrose) wants to write her master’s thesis about him, and also, perhaps, rekindle the reading public’s interest in his novels.

That is not the only thing Heather wants to rekindle. From the moment of their first encounter, there is an attraction between the retired professor and this young woman that goes beyond a mutual intellectual interest. Langella and Ambrose play this aspect of their relationship so well that the enormous difference in their ages actually becomes a part of the sexual potency. The scenes where they interact sexually are so covert that they are more like pantomimes of sex than the real thing, and therein lies their power.

The movie not only brings us into the waning of a once vibrant man’s life, and the vanishing of a city’s intellectual vigor, but also the aging of the body. As a man of great intellect and pride clothed in a seventy-year-old body, Leonard finally succumbs to Heather’s straightforward seduction with such emasculated tentativeness that it is heartbreaking to watch. She has power over him with her youth. She has taunted him out of his shell, and without the protective covering of the intellectual’s moral earnestness, Leonard becomes shriveled and needy. His awakened desire makes him defenseless. When he lends her books to read, these pillars of his life as tokens of intimacy, his stillness loses the beauty of its steadfastness; he suddenly looks stooped, hunched over from the weight of something he knows he shouldn’t want or need, but can’t help himself.

This betrayal of the body is also visited in a subplot involving Schiller’s daughter Ariel (Lili Taylor). Ariel is approaching forty, and her biological clock is a loud echo in her mind. Her longing to have a baby is complicated by the re-emergence of an old boyfriend (Adrian Lester) who is resolutely against having children. Although these two gifted actors flesh out their characters with nuance and complexity, and there is a similar theme of the body defining one’s life, Ariel’s story feels out of place in this movie. It’s as though a softly intimate string-filled chamber piece was suddenly blasted with a wailing saxophone.

Another problem with the movie is the character of Heather, the young woman who shakes up Leonard’s life. At first, Heather seems like the typical young female student who falls in love with her elderly mentor, what Joyce Maynard must have felt for J.D. Salinger, or any number of Woody Allen heroines did for their own father figures. The scene where Heather confides to Leonard why his novels mean so much to her (“They gave me my freedom”) feels genuine, and we understand only too well Leonard’s grudging infatuation. But when the pedestrian plot point rears its ugly head, that her ardor was fueled by ambition, it’s a disappointing slap in the face. It would have been a richer story if Heather had instead grown repulsed by the damage age rends to the body. Playing nursemaid to a much older man could bring any young woman back to her senses. Sadly, in this movie, Heather becomes just like any other gold digger, and once her thesis is done, her interest vanishes. The idea brings the movie down a notch, about to middlebrow level. Our only recompense is watching Leonard take his revenge with a swift slap to her rosy cheek, as any parent would to such a thoughtless child.

In many ways, movies are meant to be life writ boldly, and some strokes are more flagrantly stereotyped than others. Lauren Ambrose does a good job bringing dimension to Heather’s character, and that helps mitigate the about-face that feels forced otherwise. But no matter. This is Frank Langella’s movie. He has been given a plum of a role, and he bites into it with amazing precision and grace. It’s exciting to see an older actor give a powerful performance; it proves that old age does have its earth-shaking moments of fulfillment and beauty.