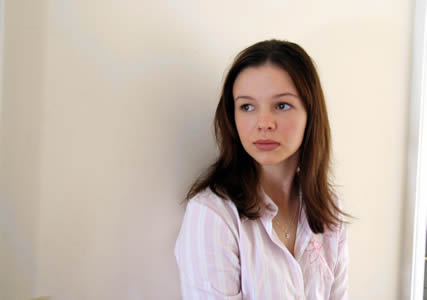 As dramatic openings go, "Stephanie Daley" has a good one. A bleeding, sixteen year old girl collapses on her high school ski trip. Rushed to the hospital, we learn that she had just given birth, presumably killed her baby, and is being charged with murder. Stephanie claims she didn’t know she was pregnant and that her baby was born dead. With little imagination we can envision the ensuing Liftetime TV movie: what a tragedy for the family but our plucky heroine will learn important life lessons and, ultimately, triumph. In the feature film version, we can expect liberal helpings of blame on flawed parents, an intolerant church, and the heartless cultures of adolescents and red state small towns. But writer-director Hilary Brougher confounds our expectations..

Actually only half of "Stephanie Daley" focuses on the title character. The other half concerns Lydie Crane (Tilda Swinton), the government-employed therapist assigned to meet with the young girl and determine what really happened to the baby. Lydie is both the perfect choice (smart, compassionate, and patient with her patient) and the perfectly inapt choice (she recently delivered a stillborn baby and is pregnant again). These two women share the experience of pregnancy, but seemingly little else.

An only child in a small town, middle class, church going family- Stephanie (Amber Tamblyn) is awkward with boys and confused about her friendship circles. She’s an adolescent. Impregnated the first time she has sex, it doesn’t really occur to her that she might be pregnant. And if it did, those thoughts would be beyond unacceptable. After her subsequent arrest, she denies having done anything wrong. Her status as a cause celebre makes her a target of taunts from local boys, and pushes her parents’ marriage to the brink. Lydie is not faring much better. She remains constantly vigilant for any indication that her own pregnancy could go awry, and she keeps her husband at arms length. She has never truly grieved the death from her last pregnancy, and she and her husband are unable to communicate about it..

Given that the film poses some stark and compelling questions of plot, it’s surprising how little of the film is given over to the narrative story. Rather, the movie is a kind of meditation on how much effort can be spent to not see, not think, not understand, and not act. Stephanie works hard to remain oblivious to her own pregnancy. Later, she almost willfully refuses to examine why she was blind to her own body and what she did after the birth. And Lydie works vigorously to not confront the deepest costs of her stillbirth.

Even more interestingly, "Stephanie Daley" juxtaposes these labors of denial to the feelings and recognition of powerlessness. Stephanie believes in God and God’s will. Lydie has a more secular sense of fate. But both women are immersed in a reality understood by all pregnant women and all parents- the chastening and sobering sense of how little we can control the development of pregnancies and the well-being of our children. The film probes the necessity of facing this powerlessness.

Brougher brings a particularly female sensibility to her work. I think most male writer-directors would structure this story around choices and actions. Will Stephanie accept a plea bargain? Will Lydie push her patient into facing the truth? Will she reconcile with her husband or pursue another relationship? But Brougher wants to peer into subtler, more nuanced forms of consciousness and awareness. We come to realize that there are no simple "yes" and "no" answers to the questions posed by this story We do get answers, but they’re less solutions to dramatic questions than baby steps steps towards a growing self-awareness in Stephanie and Lydie. Strong performances and rich characters. make Broughter’s second feature film a gem.

(2350)
$8.15 (as of January 25, 2021 - More infoProduct prices and availability are accurate as of the date/time indicated and are subject to change. Any price and availability information displayed on [relevant Amazon Site(s), as applicable] at the time of purchase will apply to the purchase of this product.)

(22171)
$3.99 (as of January 25, 2021 - More infoProduct prices and availability are accurate as of the date/time indicated and are subject to change. Any price and availability information displayed on [relevant Amazon Site(s), as applicable] at the time of purchase will apply to the purchase of this product.)
related posts