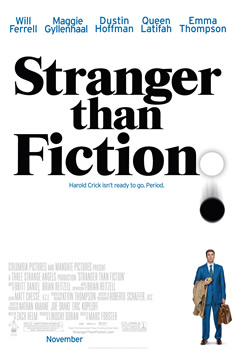 As if from a comic parallel universe, it is not Josef K who wakes up one day to find himself transformed into a cockroach, but Harold Crick (Will Ferrell), an IRS agent obsessed with numbers, who wakes up one morning to find he is a fictional character — his life is being narrated as it is happening. Harold runs a series of logical tests and determines he is hearing neither the delusional voice of paranoia nor a truly omniscient voice of God. Stylistic clues point toward a writer of crime fiction. In Stranger Than Fiction writer Zach Helm and director Marc Forster experiment with the curious literary conceit of fictional truth, making a fairly satisfying philosophical stab at the age-old question of free will versus fate.

Will Ferrell performs wonderfully, as the somnambulating accountant suddenly awakening to the life his obsessively regimented routine had been protecting him from. His digital watch erupts into moments of magical realism to help him over the edge, to take flight into the realm of the creative, the potential, the truly heart-felt. Crick’s mind shares a mathematical obsessive kinship with that of Dustin Hoffman’s idiot-savant in Rain Man or Russell Crowe’s schizophrenic in A Beautiful Mind, and the cinematographer throws up streams of screen overlays reminiscent of I [Heart] Huckabees.

Emma Thompson is exquisite as Kay Eiffel, the chain-smoking, anxiety-ridden, depressive recluse who has killed off her protagonist in every previously penned novel. Thompson inflects Eiffel with warmth, vulnerability, and complexity, as half New York neurotic, half English eccentric, and wracked with deep guilt and unmourned grief. For the first time, it seems, she is about to learn from one her characters –- as Crick must listen to Eiffel, so Eiffel must listen back when he confronts her face to face. Coming to consciousness runs like an illuminating red thread through this plot.

The post-modern delight in the eruption of the irrational lies at the heart of this narrative. While Crick is tracking down his author (he has access to IRS tax returns and everyone’s social security number), he has jumped the track, and finds himself falling inexplicably in love with a young baker Ana Pascal (Maggie Gyllenhaal), a new millennial anarchist, who has withheld payment of that portion of her taxes which go to causes she does not believe in. Gyllenhaal’s physicality, both sensual and seductive, works its magic, suspending disbelief of tax man and audience alike.

Dustin Hoffman co-stars as Professor Jules Hilbert, the literary scholar Crick ultimately settles upon as his guide, mentor, and confidante, who poses the all-determining crucial question: is Crick’s life a tragedy or a comedy? Tom Hulce (Wolfi Mozart in Amadeus) turns up as a bearishly hirsute corporate psychologist, all big hair, sandals, and love beads. Queen Latifah executes a perfunctory performance as Penny Escher, the publisher’s goon sent to be sure Eiffel bumps her protagonist off.

Stranger Than Fiction charms with many surprises. This film takes off and takes wing for much of its narrative thread. When it flies, it soars. But it develops leaden feet as it spins over into a convoluted, overly long wind down. This is an intelligent, engaging film that gets it right, for the most part, before ultimately capitulating to the demands of Hollywood narrative.