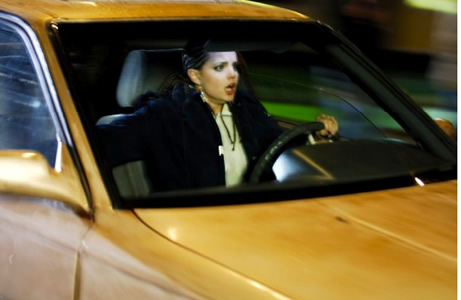 2AM, Forth Worth, Texas, October 26, 2001, high on alcohol and drugs, a young woman driving home from a night of partying. A homeless man is crossing the street when he is struck by her car. The force of the impact lifts him in the air and he crashes head first through her windshield. Panicked, she drives home with his torso resting on her dashboard and his lower body on the hood. When she parks the car in her garage, she discovers that he is still alive. Over the next two days, she apologizes to him as she lets him die. Then she, her boyfriend, and his cousin dump the body in a park. Months later she tells a friend, laughingly, that she, a Black woman, had run over a “white man.” She is eventually brought to trial, convicted, and sentenced to fifty years in prison.

This true story has been the basis of episodes of CSI and Law and Order, inspired a song, and is now a feature film. And why not? If we want to take it seriously, it’s hard not to be curious about her. She was prepared to let him die but couldn’t countenance killing him, even to end his suffering. Their racial differences obviously mattered to her, but in what way. She clearly felt real remorse and also thought the event was humorous. Who is this woman? But we can also imagine the story done as a dark comedy. The primordial image of her driving around with half of a man on her hood invokes titters of discomfort. And their possible conversations with him wedged in her windshield have absurdist possibilities. But director Stuart Gordon (Re-Animator, Edmond) hasn’t a clue what to do with this story.

And the audience has no idea what kind of movie we’re watching. Brandi (Mena Suvari- American Beauty) works hard and well, respecting the seniors she cares for in a retirement home and anticipating a well-deserved promotion. Tom (Stephen Rea- Crying Game) has been downsized out of a job and is being evicted from his flop house. Initially, the film feels like a drama, with three dimensional characters that we have begun to care about. Then the accident occurs and the movie loses its bearings. Over the next two days, we are treated to a melodrama at work as Brandi loses her promotion and a “cat-fight” comedy sequence when she catches her boyfriend, Rashid (Russell Hornsby) with another woman. In the mix is an explicit sexual encounter and several scenes of excruciating pain as Tom tries to free himself. What is going on here? Gordon seems hopelessly confused about the genre of his own film.

Then we get the predictable sequences in which Tom is almost discovered and freed. We know that he won’t be saved because it’s not the last ten minutes of the movie, so that limits the suspense to be had. And in the final confrontation between Brandi and Tom in the garage, we can guess that a movie lacking any artistic conviction, will also lack the courage to give us the dark ending of the real event. The only saving grace in the movie is Russell Hornsby’s performance as the boyfriend. Not nearly as tough as he pretends to be, he is, by turn, selfish, pathetic, funny, and callous.

It may not have been intentional, but Gordon has done something interesting with gender and race. Think how many times you have seen a film (war movie, action, horror, thriller) where the woman-victim finally gets the upper hand over the villain, but, gosh darn it, she just never thinks to kill him- hasn’t the heart, the balls, or the presence of mind. And then, amazingly, he comes back to terrorize her. Duuuh. I know there are many explanations for misogyny in the world, but I would suggest that repeated viewings of this behavior as the single most powerful and compelling explanation for the hatred of women. But in Stuck, it’s the man who is this aggravatingly stupid. Twice. Tom’s classic, “female” idiocy either reflects that movie clichés are gender neutral or that Gordon is deconstructing this conventional sexist trope.

The other interesting issue concerns the casting of white Mena Suvari in the role of a black woman. Or is she black? She seems black. She listens to rap music, wears her hair in cornrows, has a black, drug-dealing boyfriend, her best girlfriend is black, and she has a lot of black “attitude.” Even if we did not know that the woman on whom her character is based is black, we would suppose she is black. But then again, maybe she’s not. She seems black but she doesn’t look black. There are, of course, black people who look as white as she is. And there are, of course, white people who have the same features of a black life-style that she does. So, what can we conclude about race? Interestingly, nothing. In 2008, race is rich and complicated enough that neither appearance nor life-style nor affect can really tell us about the racial identity of a character.