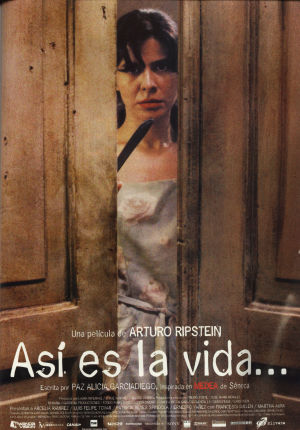 Medea is one of the great figures of classical literature, the subject of plays by Euripedes, Seneca, Corneille, and Robinson Jeffers, of operas by Charpentier and Churbini, of a film by Pasolini starring magnificent Maria Callas in her only non-singing role. At various times a sorceress, a priestess, a political schemer, and a queen, Medea’s unforgettable act was to murder her two children by Jason when he left her to marry a princess.

Mexican director Arturo Ripstein (No One Writes to the Colonel) adapts the Medea story in his film, Such is Life, placing it in a Mexico City barrio. Medea here is Julia (Arcelia Ramirez), a medicine-woman and abortionist, mother of two children by Nicolas (Luis Felipe Tovar), a second-rate professional boxer. Nicolas is leaving her for Raquel (Francesca Guillen), daughter of Julia’s landlord, known as "Pig" (Ernesto Yanez), a fat and sleazy neighborhood consiglio, taken to wandering about the courtyard in his bathrobe. Pig will tell Julia she has to get out of her place, yet another blow to this woman from whom all material and emotional resources are being stripped.

Ripstein shot the film digitally, using a hand-held camera. (The video was later transferred to 35 millimeter.) The result is both an immediacy and an intimacy, with all the action taking place in the cramped interiors or the courtyard of one apartment house. (An exterior shot opens the film and recurs frequently–the glittery back of a van moving through city traffic and through a tunnel. The van never plays a direct role in the story and Ripstein’s intention (inexorable fate?) is not at all clear.)

But mostly, the story stays focused on the heroine who starts with a monologue of misery and descends relentlessly from there into impassioned despair. She focuses on her children, the most significant connection to Nicolas; when he tells her he is going to keep the children after his marriage to Raquel, he unknowingly seals their fate.

Ramirez (Like Water for Chocolate)is a powerful performer and in the first monologue creates genuine sympathy for her beleaguered character. In later scenes she beats her head repeatedly against a wall, she pounds her fists on her face, she draws blood cutting into her own flesh. As her misery progresses, though, sympathy for her becomes strained. The film becomes too much of a one-note rant, ultimately shutting down the viewer’s empathy rather than engaging it.

The great tragedies provide catharsis, a release from the tension created by the dread and terror of the events transpiring. But that catharsis to some degree depends on the contrast of the doomed fate of the hero to the hero’s noble standing. Tragic heroes are bigger than life. But Julia is not bigger than life–she is bogged down in a life of urban poverty and squalor, being betrayed by an unremarkable man in an ordinary way. Her fate is pitiable, but in Such Is Life it never transcends pity to achieve the genuinely tragic.

In the great Medea plays, poetry adds beauty in and of itself, as well as intervening between the audience and the tragic events, allowing for a necessary emotional distance. In the operas, the beauty of the music heightens the emotions and adds a sensual counterpoint to the grim workings of the story. Ripstein, perhaps, intended the asides with the chorus and the ever-present television to allow some backing off from Julia’s misery, but the very digital technique that gives him such freedom here also brings the audience in too close to the drama to allow the necessary distancing.

It is exciting to see an established auteur like Ripstein exploring new technology, new ways to create his art. Prolific as he is, there will no doubt be another film from him soon, perhaps with a more felicitous meeting of technique and subject. Unfortunately, the chances are that no one in the United States will get to see it, since Ripstein’s films, like last year’s brilliant No One Writes to the Colonel, cannot surmount the corporate distribution systems that flood the country’s screens with unfunny adolescent comedies and pointless prurient violence while shutting out serious foreign and independent films.