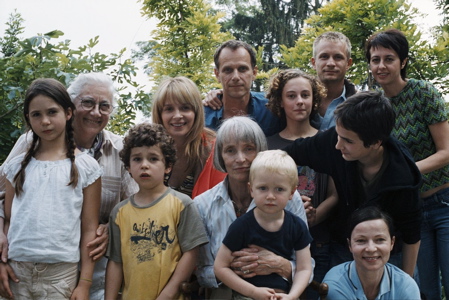 Summer Hours is as perfectly formed as the objets d’art that figure so heavily in its story. Olivier Assayas has written a film with the grace and precision of a true artist. The actors embody their roles with an air of complete understanding, and the themes addressed are deeply resonating, as timely as they are universal. This is grand moviemaking. Assayas has made a masterpiece with the restrained strokes of a contemplative and intelligent artist, and it’s that restraint and intelligence that allows the film to exude its power over us.

The film’s richness hinges on an otherwise quite common, though momentous, phase of everyone’s life—the death of an aging parent, and the practical matter of how the heirs should divvy up the estate. Assayas chooses to keep close to the surface of these events, concentrating on the practicalities—the nuts and bolts of burying the dead, like cemetery plots, appraisals, meetings with lawyers, the wording of the obituary—and letting the concurrent emotional and thematic elements flow out of these otherwise mundane activities on their own. And flow they do, all the more poignantly in their discretion.

The film is divided into three parts, with a brilliantly discordant coda at the end. In the first, Assayas presents us with the linchpin of a bourgeois French family, its matriarch Hélene (Edith Scob), who lives alone on her country estate. On the occasion of her 75th birthday, her three grown children and their families come to celebrate, a rare family reunion now that her children have moved away and built lives of their own. Frédéric (Charles Berling), the oldest, still lives nearby in Paris, but Jérémie (Jérémie Renier) the youngest, has relocated with his family to China for business, and her only daughter Adrienne (Juliette Binoche) has chosen an expatriate’s life as an artist in New York. The reunion reveals a family already long dismantled, though the vestiges of its existence are still evident in the exchanges around the opening of presents, the subtle rivalries and intimacies between the three siblings, and the mother’s dogged insistence on keeping the artifacts of her life—the house and the substantial art collection she herself inherited—intact while she is still alive. You wonder why Hélene has so much emotional investment in all the objects around her, until you realize that’s all she has left. Hélene understands that her role as the keeper of memories will be over after she dies, and therefore the symbolic value of the objects she holds dear—what she calls “the residue” of a life—will also disappear. “A lot will die with me—memories, secrets,” she tells her eldest son. She knows Frédéric will be the one who will find it hardest to let go of the past, and she discourages him with some unsentimental advice. Sell it all, she tells him. She has seen the inevitability of change herself, and will not stand in its way.

A year later, the mother has died, and the film’s second part once again concentrates on material concerns. After a brief, and rather awkward, acknowledgement of the sadness of their mother’s sudden passing, the siblings get down to the business of their inheritance that evening over dinner. The scene is an incredible piece of ensemble acting. The conversations are extremely realistic, even banal in their lack of overly dramatic buildup and tension. The siblings talk of practicalities—the resemblance to real life conversation is deadly accurate—but underneath, Assayas is showing us so much more. We are witnesses to a family dirge; in effect, the dissolution of centuries of accumulated history. Frédéric is there to remind us with the sole expression of regret over the decision to sell the house. He understands what is at stake. However subtle and lacking in pathos, the emotion is painted within the scene. Frédéric is the conduit of the nostalgia we all experience when the last parent finally dies, and we see our childhood die with them.

The last part of Summer Hours is the dispersal of the estate, and the transfer of the mother’s art collection to the Musée d’Orsay, the Paris museum that has become another kind of cemetery, where the residue of French culture has found its own final resting place. It is through these scenes meticulously detailing the transmission of the family’s treasured artifacts that we realize that Summer Hours is about much more than the death of a mother, or the end of a family. It’s about a whole society, a nation, dying off. Globalization, in its attempt to merge economies, is also transforming societies, and this not only effects family traditions, but national cultures as well. Here in the U.S., a country of immigrants and constant relocation, we may not feel the effects so much, but France, and Europe in general, is different. The ramifications present a more complicated transformation, and, in some way, a more noticeable sense of loss.

After all the acknowledgement of the end of things, Assayas leaves us with a scene brimming with life. Frederic’s teenage children have planned a weekend bacchanal at their grandmother’s country house before the family has to relinquish it to the new owners. We see young people descending on a home that had been in stasis for so long. It’s a scene of renewal; Assayas is not one to regret inevitable change. It may not be the way it was before, but it’s the flow of life, and being reminded of that helps to assuage our melancholy for the past.

I found Summer Hours an uplifting film in the end. Just as I did of last year’s other film commissioned by the Musée d’Orsay to celebrate its 20th anniversary. Hou Hsiao-Hsien’s Flight of the Red Balloon also addresses the effects of globalization and contemporary life on French society, but in a different way. In that film, a Taiwanese director came to France to bask in its culture. In Summer Hours, a wandering Frenchman—Assayas often works outside of France—comes home to say goodbye. Both films share a certain quiet (though not somber) tone, where darkness and light commingle.

I’m about the same age as Olivier Assayas, a few years younger, and my dad still lives in the same house I grew up in. The house is like a member of our family, and I know the day will come, sooner than I care to admit, when my sister and I will have the same conversation as Frédéric, Jérémie and Adrienne. I already know that my sister’s sentimental attachment is like Frédéric’s (I am more like Adrienne), but I, too, will have a hard time letting go. Summer Hours speaks eloquently and profoundly of an experience I know will be a difficult one for us. Beyond what it says of the world at large, it’s still an intimate film. I know that I’ll think of it when we empty my father’s house of its half century of accumulated things, and that it will comfort me with a sense of understanding. That is, after all, what the best art is for.