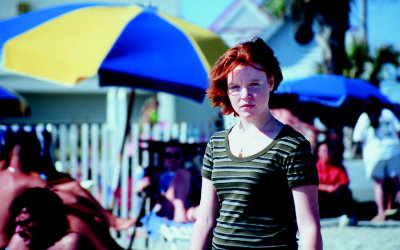 Swimming works so hard to do things right that, for the first half hour or so anyway, it commands a fair degree of positive expectation. Characters are introduced who are appealing and played well by the young, talented cast. A situation is set up that creates a bit of tension and whose resolution could be interesting. Unfortunately, the film never gets past that first stage and its lack of something fresh to say mires it down like a bee stuck in molasses.

Swimming fits solidly into the coming-of-age story genre, which can vary widely and range from such superb films as Member of the Wedding and The 400 Blows to the turgid and dull (My Life So Far, The Last September). The story is centered on Frankie Wheeler (Lauren Ambrose) who has inherited her family home and businesses on a 50-50 basis with her older brother, Neil (Josh Pais). But Josh is married with two young kids and has assumed the role of boss with Frankie’s tacit consent, though she clearly holds resentment over the dependent role in which she has been placed.

The location is Myrtle Beach, South Carolina, where college kids, military posted nearby, and beach rats of all stripes hang out for the summer. The Wheeler’s have a coffee shop on the boardwalk next door to a piercing parlor run by Frankie’s best friend, Nicola (Jennifer Dundas Lowe). Despite her inexperience, Neil hires a tall, leggy blond waitress, Josee (Joelle Carter), the current squeeze of the local life guard. Each seems to fit snugly into a rather predictable role–the edgy party girl, the sexy blond who breezes through on her looks, the narcissistic young stud. But where Nicola tends to drag Frankie around for company, Josee seems to offer a more giving friendship, generating jealousy in Nicola.

In the midst of all the beach body pulchritude on display, Frankie wears t-shirts and denim overalls. She’s not quite reached that point of maturity where she feels at all secure in her own body and appearance A young man, Heath (Jamie Harold) is drawn to Frankie and she ever so slowly starts to bloom. And there’s a young Hawaiian Marine who is accompanied by an imaginary companion, Ted. Nicola falls for him on their first date; he passes out drunk.

It all begins to take on an air of deja vu–this is territory which has been traversed many times before.With the exception of the unexplained schizoid Marine (an allusion to Harvey?), these characters fit the mold of the genre without straining it, no less breaking it. They are sensitively portrayed, with long-held shots, especially of Frankie’s face, presumably intended to express the changes that are going on in her feelings. But Ambrose (Six Feet Under) doesn’t yet have the skills to convey those subtle, nonverbal emotional shifts, so the repeated looks at her noncommunicating face slow things down noticeably.

Director Robert J. Siegel tells his story in an unhurried style–so unhurried it stagnates. He works hard to establish rounded characters, but then has nothing fresh or particularly interesting to say about them. And he nicely avoids the sort of mawkish sentimentality that often comes with this territory, but he also fails to find an edge, an individuality, a real dramatic point to make. Momentum flags within forty minutes and it’s a clock watcher from there on in.