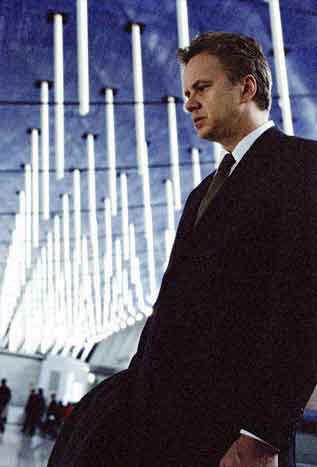 The wristbands have all been snipped, wallets are depleted, and the normal rhythms of everyday life have resumed in Austin, TX. Officially, the 2004 South by Southwest festival was, as always, a showcase for unsigned bands and unheralded filmmakers, a chance for struggling artists to be seen and heard and perhaps signed to a major label or a three-picture deal with a studio. For Austinites, however, SXSW remains the foundation for a citywide block party &#150; Spring Break for would-be grownups and slackers-at-heart.

The badge-wearing industry types might never know it, but it&#146;s quite possible to have a full and rich festival experience without ever attending an official SXSW event. Many of the bands with official showcases make the most of their few days in Austin, playing afternoon shows in bars or record stores or even on your front lawn if you let them. Couldn&#146;t get into the Li&#146;l Cap&#146;n Travis show Wednesday night at Club DeVille? You could catch them for free the next afternoon at a neighborhood block party, or the following day at the Caucus Club.

If you do have a badge or wristband, things get infinitely more complicated.You&#146;ve got to spread those nightly schedules and venue grids out on the coffee table like a general planning for battle.Decisions must be made with ruthless efficiency, and Swiss watch timing is a must.Can you realistically make your way from the 11 PM B-52s gig at Stubbs in time to catch Mission of Burma at La Zona Rosa at midnight?Fortunately, there&#146;s something for everyone, from the free-to-the-public Auditorium Shores performances by Kris Kristofferson and Toots and the Maytals to the &#147;top secret&#148; They Might Be Giants show that shook the rafters at the small 6th Street club The Parish.

Before the music even began, however, the SXSW film festival was already in full swing. This year&#146;s lineup emphasized political documentaries, and a pair that premiered on the first full day of the festival left no doubt as to which end of the political spectrum was being embraced. The Hunting of the President, Harry Thomason’s adaptation of the book by Joe Conason and Gene Lyons, unfolds with a hyperkinetic tabloid style reminiscent of Oliver Stone&#146;s JFK. While this is off-putting at first &#150; and while longtime Bill Clinton crony Thomason makes no bones about his bias &#150; Hunting is a concise primer on the smear campaign that dogged Clinton from the campaign trail to the White House.Clinton&#146;s successor gets grilled in Bush&#146;s Brain, which should be required viewing in this election year.This hot-off-the-presses adaptation of the book by Wayne Slater and James Moore tells the whole sordid tale of presidential advisor Karl Rove and his long history of dirty tricks.Playing to a packed house at the Paramount Theater, just a few blocks down Congress Avenue from the Texas Capitol, this incendiary piece of agitprop had the troops fired up and cheering.

The rest of the film lineup consisted of the usual eclectic batch of premieres, documentaries and low-budget indies, including:

Code 46 &#150; To describe director Michael Winterbottom as an eclectic talent is something of an understatement; he&#146;s a chameleon of a filmmaker, reinventing himself with each new release.Winterbottom followed his brash, comic take on the British post-punk scene 24 Hour Party People with the gritty, documentary-style In This World, about the plight of Afghani refugees.He makes another about-face with Code 46, a sort of cross between Lost in Translation and Eternal Sunshine of the Spotless Mind that never really comes to life.A science fiction romance set in a multilingual future where cloning is commonplace and viruses are used to enhance human functionality, the film traces the starcrossed love affair between a government investigator (Tim Robbins) and a possible murder suspect (Samantha Morton).Code 46 is inventive and clever, but not especially engaging; you&#146;re left with the feeling that the better part of the movie is locked away in the director&#146;s brain.

Napoleon Dynamite &#150; One of the big buzz movies out of Sundance earlier this year, Napoleon Dynamite has already been snapped up by Fox Searchlight for distribution. It&#146;s a relentlessly quirky high school movie, a sort of remedial Rushmore set in the Idaho hinterlands. Stylistically, it’s a thrift shop of the tackiest and kitchiest America has had to offer for the past 30 years &#150; it’s chock full of bad haircuts, ugly clothes, orange vans, wood-paneled basements and all the worst music you’d hoped to never hear again. Jon Heder gives a fearlessly dorky performance as the title character, an outcast who tries to help his only friend become class president, and there are admittedly a number of belly laughs along the way. Still, it&#146;s hard to shake the feeling that director and co-writer Jared Hess is trying to have his cake and eat it too, as he sets his characters up for mockery time and time again only to embrace them at the last minute.

The Mayor of the Sunset Strip &#150; If the name Rodney Bingenheimer means nothing to you, you probably haven&#146;t spent much time in Los Angeles over the past 30 years. A longtime radio fixture with his &#147;Rodney on the ROQ&#148; program, Bingenheimer is the Zelig of George Hickenlooper&#146;s documentary meditation on the Hollywood culture of fame worship.A rock fan who was seemingly everywhere in the 60s and 70s &#150; standing in for Davey Jones on The Monkees, hanging out backstage with David Bowie or Sonny and Cher &#150; Bingenheimer is a haunted, sad-eyed gnome of a scenester.His core of loneliness fuels his need for acceptance in the celebrity world, and marks a sharp contrast with the amoral Kim Fowley, another rock scene hanger-on whose every pronouncement drips with acid.As in his little-seen indie The Low Life, Hickenlooper nails the underlying desperation of the Los Angeles fringe.

$5.15/Hr. &#150; Richard Linklater&#146;s unaired HBO pilot was shown as an unannounced special screening to an appreciative audience that may well be the only one to ever see it.More entertaining than the show itself &#150; a promising workplace sitcom short on wacky antics and heavy on deadpan observational humor &#150; was the post-screening Q & A by Linklater and his co-creator, Rodney Rothman.Embittered by their experience with the unidentified HBO executive who declined to pick up the show (on the grounds that the network&#146;s target demographic would be uninterested in watching minimum wage workers), the creators of $5.15/Hr. mixed praise for the finished product with lively invective aimed at the industry.It was the spirit of SXSW in a nutshell.

(9237)
$14.98 (as of January 24, 2021 - More infoProduct prices and availability are accurate as of the date/time indicated and are subject to change. Any price and availability information displayed on [relevant Amazon Site(s), as applicable] at the time of purchase will apply to the purchase of this product.)

$2.71 (as of January 24, 2021 - More infoProduct prices and availability are accurate as of the date/time indicated and are subject to change. Any price and availability information displayed on [relevant Amazon Site(s), as applicable] at the time of purchase will apply to the purchase of this product.)

(9620)
$6.94 (as of January 24, 2021 - More infoProduct prices and availability are accurate as of the date/time indicated and are subject to change. Any price and availability information displayed on [relevant Amazon Site(s), as applicable] at the time of purchase will apply to the purchase of this product.)
related posts