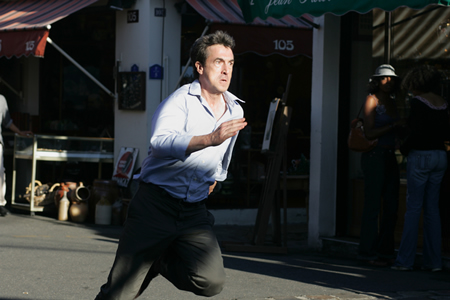 Even with a stellar cast, a story with enough plot twists and dramatic revelations to keep a necrophiliac awake, and a solid run of César wins (France’s equivalent of the Oscar) to recommend it, I don’t know why I can’t muster much enthusiasm for Tell No One. I have a theory, though, which has to do with certain expectations I have about French cinema, expectations that may reveal my own narrow-minded opinion of what a French film should resemble more than anything else. I admit to being one of those old-fashioned types who bemoan the homogenization of culture, one of the side effects of globalization, and therefore shudder at the idea of the Americanization of French cinema. And that was my reaction to Tell No One. It feels like an American movie, dubbed in French.

Or perhaps, better put, it feels like a bunch of French people trying to act like Americans.

And what’s wrong with that, you may well ask? Maybe that’s exactly why the film was such a huge success in France when it came out two years ago, and why critics here are embracing it at the onset of its American release. It is, to be sure, an entertaining thriller, and the actors are all superb. But its creative energy feels calculated, almost self-conscious. Whatever happened to the days of Cinema du look, when French directors like Luc Besson and Jean-Jacques Beneix were reworking the Hollywood crime film genre into their own French meta-detective genre, in films like Subway and Diva? Or even before that, when films like Godard’s Breathless and Truffaut’s Shoot the Piano Player created auteur works out of American crime fiction. Those films were original; they looked like nothing else.

Tell No One is an adaptation of an American mystery novel, the 2001 bestseller by Harlan Coben. Coben’s novel is classic crime fiction, and also deeply entrenched in the landscape of New York and the New Jersey suburbs. A lot of the story is hardboiled cop stuff, real Americana—police corruption, serial murder copycatting, innovative torture techniques, narrow escapes. And of course—a real deal-clincher in Hollywood—the story is heavily plot driven. An upstanding pediatrician, Alex Beck (Francois Cluzet), is having a holiday out in the country with his beautiful wife (Marie-Josee Croze). They have an argument, she leaves in a huff, later he hears her screaming and goes looking for her, and promptly gets knocked out by a fist to the face. She’s found dead the next morning, supposedly the victim of a serial killer. And this is all in the film’s first 15 minutes. Cut to eight years later, and the case is reopened because new evidence turns up that implicates Alex, who had also been a suspect during the initial police investigation. Meanwhile, Alex has just received an email that contains a video of a woman who looks like his dead wife, and several subsequent messages contain information that only she could have known. Convinced that his wife is still alive, Alex starts investigating on his own, and his behavior draws the attention of not only of the police, but a mysterious gang of thugs who also seem to have an interest in knowing whether Alex’s wife is alive.

In relocating Coben’s story to Paris, director Guillaume Canet may have used French soil and French blood, but the characters still remind us of standard American stereotypes. Many of the scenes feel like they’re straight out of an episode of Law and Order, as when the female detective gets to book the corrupt politician while his trophy wife is sitting next to him looking on in a kind of stupefied disbelief. (She even says to her husband, “Honey, is anything wrong?” in French, of course.) Or when the defense attorney, played by Nathalie Baye, answers her cell phone while sweating on a treadmill at her own private gym. She is particularly grating when we see her play hardball with the cops who are after her client. I’ve seen a lot of tough women lawyers in tailored suits giving pompous prosecutors their comeuppance on TV, but I never thought Nathalie Baye would end up being one of them.

And how can we not compare Francois Cluzet to Dustin Hoffman, the Everyman who suddenly finds himself stuck in the middle of an underworld of murder, cover-ups, cops and criminals. Francois Cluzet is the Dustin Hoffman of Marathon Man (Cluzet even gets to run a lot), the mensch with an instinct for survival, and the nerve to take on the bad guys. Cluzet is an indulgent actor, and, to be fair, his performance in Tell No One is actually quite good. He acts completely, both physically and emotionally, and at 50, he is pretty darn exhilarating to watch—he’s a sexy mensch. There is a brilliantly choreographed chase scene where Cluzet has to run across an eight-lane freeway during rush hour in order to escape the cops who are after him, and the balance of fear and determination he projects in his face and his body is a magnificent bit of acting. (Unlike much of the movie, the chase scene is quite original, and brilliantly executed. It reminded me of the chase scene in Diva, which involved riding a moped through the Paris subway.)

But Cluzet’s performance can’t lift Tell No One out of mediocrity. Neither can the other fine performances, and there are several. Kristin Scott-Thomas is especially captivating as Alex’s confidante, a lesbian who also happens to be his sister’s girlfriend. (Don’t ask.) And Francois Berléand gives a nice twist to the eccentric cop character, bringing some much-lacking French humor to his characterization of a persnickety middle-aged detective who knows more than he lets on.

Perhaps it is because Mr. Canet is so young, and therefore already a part of the homogenized generation, but his direction here feels like it was honed on a Hollywood back lot. It’s assured but doesn’t veer from the generic. Still, there is talent there, at the very least in his ability to attract talent. And for Francophiles like me, that’s worth the price of admission right there.