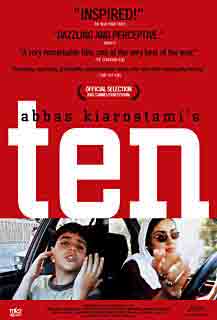 The Iranian director Abbas Kiarostami is the darling of the art house critics. He’s made some thirty films over the past three decades, but only a handful have been released in the United States. These are not films tailored to commercial tastes. A Taste of Cherry (1997) won the Palme d’Or at Cannes and The New York Times called it "exquisite" and "a simple, eloquent parable." But others find watching this snail-paced story of a man driving around Tehran looking for someone willing to bury him so that he can commit suicide to be about as interesting as watching paint dry.More recently The Wind Will Carry Us won an ardent admirer in culturevulture.net reviewer David Fear.

Since then, Kiarostami has become intrigued with digital video cameras. For his current film, Ten, he mounted the camera on the dashboard of a car. Each of the ten segments of the film is a seemingly uninterrupted take of either the driver, a middle-class divorcee, or her front-seat passenger of the moment, the latter including in the various segments her son, her sister, an old woman, and a prostitute. The actors worked from a script, but with the constant driving around the streets of the city, the noisy sounds of traffic, and the utter absence of plot, the film has the texture of a documentary.

The ten segments are numbered (from #10 first, down to #1), but the ordering seems somewhat arbitrary; shuffle them up and show the segments in random order and the effect would not be much different. The unifying subject is the position of women in Iranian society. The driver has achieved a degree of liberation. She divorced her husband, who, in the traditional Iranian way, expected her to stay shut away at home like chattel, living only to serve him. Now she lives with a new man, presumably of a more contemporary frame of mind, and her young son alternates his time between his parents.

One of the women passengers fans herself against the heat, even as she wears her chador tightly wrapped around her neck. They talk of being working mothers and daycare. The old lady has given herself up completely to religion, going so far as to sell her home so that she could go on a pilgrimage. The hooker (who, in a rather forced bit of scripting to get her into the car and the film, mistook the driver for a man) is utterly cynical, claiming to like her life of pleasure, while repeatedly complaining that her feet hurt. Another passenger is in despair over the loss of her man, seemingly having no identity of her own apart from him.

But it is the conversations between son and mother that are at the heart of the film and give it its greatest energy.The boy, a remarkable actor, reveals more about ingrained sexism in his harangues of his mother than do all the words of his mother and her other passengers. With one foot in the modern world (he’s studying computer programming), he still clearly has taken his cues from his father and is condescending and critical of his mother: "I can’t live with you. You’re a selfish woman."

In this series of conversations, Kiarostami brings out a variety of subtle and not so subtle points about women’s changing position in Iran. Both thoughtful insight and human concern are evident. But, especially with the passengers other than the son, there is no dramatic momentum whatever, and overall the film seems to drift on a horizontal plane. Although of standard length, it’s hour and a half running time seems longer, stretched out beyond the substance of its content.