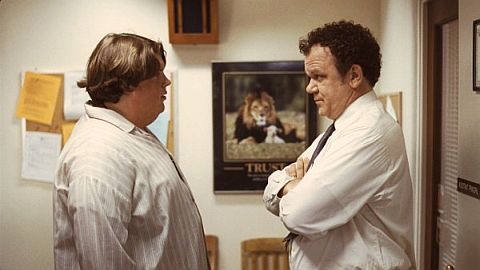 There are those of us who are not so easily amused by the onslaught of the big Hollywood summer movie selections, who long for the more substantial fare usually offered up by the indie world. In contrast to the blockbusters, the indie and foreign film pickings in the summer are slim, but if we’re lucky, they’re good and delectable, and well worth the wait. Last year it was “The Kids are All Right” and “Io sono l’amore.” This year, somewhere in between the flash of “The Green Hornet” and the noise of “Transformers 50” (or whatever number they’re on), there will be at least a few films that emit a few chuckles, soothe the soul, tug at the heart, or make you think.

One of the first to least attempt that is “Terri” starring John C. Reilly and impressive newcomer Jacob Wysocki. “Terri” is the follow up film to director Azazel Jacobs’ critically acclaimed “Momma’s Man,” and produced by the team that brought us “Half Nelson” and, more recently, “Blue Valentine.” Although this production has an impressive indie pedigree, so to speak, it’s not quite in their previous films’ league as far as strength of story and depth of character. That said, “Terri” is charming and somewhat engaging as it reveals the new and unlikely friendship between the title character (Wysocki), an overweight teen misfit, and his odd, menacing, yet well-meaning high school principal (Reilly).

Terri is not like most of his fellow students; he is parentless and living meagerly with his elderly, sickly uncle whom he takes care of more than the other way around. As a further source of alienation, Terri wears pajamas instead of clothes, and develops a pattern of tardiness and absenteeism. Terri is also friendless and lonely, and seems detached from most of the things we associate with other kids of his age. Just as he thinks he’s going through life unloved and invisible to others, Principal Fitzgerald takes notice and takes charge, offering weekly counseling sessions, and his friendship.

Despite a series of clumsy missteps on the part of Fitzgerald that are perceived by Terri as callousness, the two manage to navigate their way to a sincere sense of concern and camaraderie.

Although overall this movie is somewhat in the same vein as the previous films presented by these producers and the director, “Terri” is much quieter and subtler. It some ways, it seems too quiet and subtle, as though there is not enough going on to make a movie. But maybe that’s exactly what Jacobs had in mind-a simple character study, a simple slice-of-life tale. And in the end, that’s its appeal. In the midst of the slick, loud and over-produced, there is “Terri.”