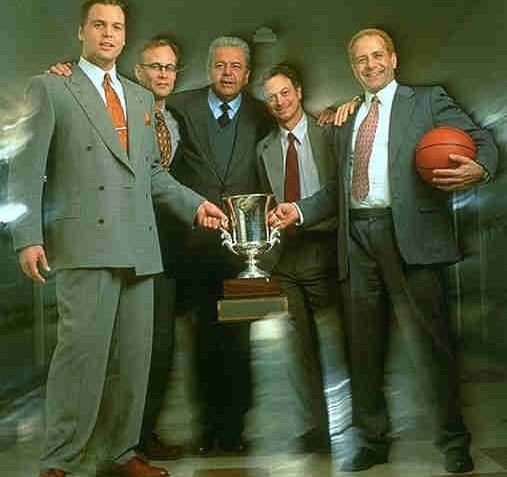 That Championship Season is a great remake of the Jason Miller classic, which revolves around four of five players who were the stars of their high school’s improbable state basketball championship twenty years earlier. Now in their late thirties, three of these men plus their coach have remained in Scranton, PA, while two have moved away. Every year those remaining get together to talk about old times and this year is the 20th anniversary of that victory. Surprisingly, the fourth member of the team joins the reunion to help honor their coach, who is recovering from stomach surgery.

The action in the film takes place in the living room at Coach’s house, where the former teammates have gathered late in the evening. Tom Daley (Gary Sinise), the out-of-towner, is a hopeless alcoholic and his teammates have plenty of problems of their own. George Sitkowski (Tony Shaloub) has become mayor of the town, but faces a very difficult reelection campaign and desperately needs the support of fellow teammate Phil Romano (Vincent D’Onofrio), a businessman of extremely questionable morals. The fourth player present is Tom’s brother James Daley (Terry Kinney), a tautly wired junior high school principal who has spent his life serving others and counts the hours until he can grab what he feels everybody owes him.

Holding the group together is their love for Coach (Paul Sorvino). As the evening proceeds over many, many drinks, it becomes obvious that any of these four men would do anything Coach asks. He is their beacon as well as their shame, because all of them know the unspoken secret, the true reason they won that game 20 years ago. It is also the reason the last member of the team, Martin, left town and has never returned. Clearly, winning that game in tarnished fashion has contributed to the misery that each of these men has carried with him since that day.

What a phenomenal piece of writing, as well as ensemble acting! (The play won the 1973 Pulitzer Prize for Drama.) If the original cast, which featured Sorvino as well as Martin Sheen, was once called by New York theater critic John Simon "the best ensemble cast I have ever seen," this one cannot be far behind. As each moment passes, another person’s kinky secret is revealed, another level of animosity is exposed. Mayor George is a political hack who has remained in power only through patronage and corruption. Phil’s fortune is hinged on George’s continuance of dubious landfill contracts, but Phil suspects that George will be defeated by a challenger, Sharman. So Phil is thinking of jumping ship and supporting Sharman instead of George. This could have something to do with the fact that Phil is also sleeping with George’s wife, Marion, who, in turn, has been sleeping with everybody in town.

The Daley boys have their issues, too. Tom is a total drunk and James has demented political aspirations of his own. Coach is an unreconstructed bigot who waxes kindly about his heroes like Father Coughlin and Joe McCarthy, and is full of endless aphorisms like "The price is pain, boys. Without pain there can be no success." Racial and religious epithets flow as freely as the scotch and water.

Each man is a time bomb waiting to explode. Phil talks about getting drunk and driving 140 mph on the freeway in his Porsche. George holds a loaded shotgun to Phil’s head, then pukes into the Championship Trophy, which sullen James is then ordered to clean up, to Tom’s drunken delight. The symbolism is not subtle here, but is very effective.

In the end it is clear that while every person is terribly flawed, they still have one chance at redemption. As Coach plays them a tape recording of the last few seconds of their victory in their one great championship season, they realize they must pull together for George’s reelection campaign, led by Coach’s direction and Phil’s money. In the end the teamwork that worked once may work again. It is their one chance to return to glory.