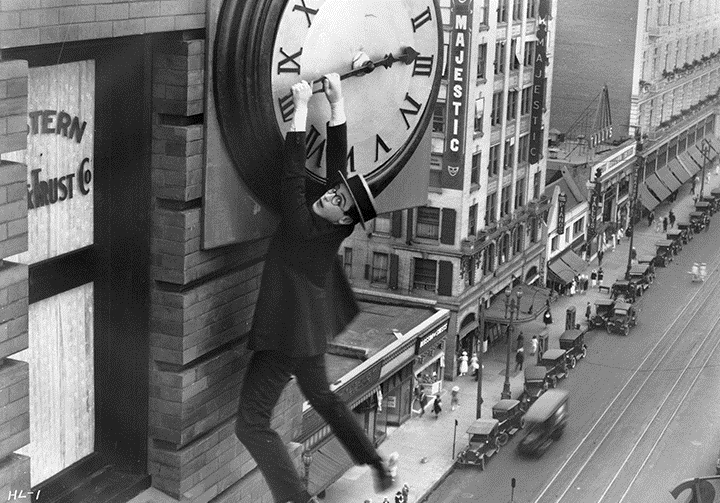 Harold Lloyd hanging from a clock in “Safety Last!”

Last month’s series of nine silent Hitchcock films (to be repeated at Berkeley’s Pacific Film Archive in August, in case you missed them) was only an appetizer to the San Francisco Silent Film Festival’s big annual banquet, July 18-21. And as usual, the festival’s directors have scored some treasures, both American and foreign, featuring well-known names (Charlie Chaplin, Harold Lloyd, Greta Garbo) as well as new—to many of us—discoveries.

Garbo and Louise Brooks are the two major stars, anchoring the opening night film and the Saturday night “centerpiece.” Brooks’s “Pandora’s Box” is the most frequently seen of her small output, and has been shown at the SFF in the past. This year’s film is the 1930 “Prix de Beauté,” her last starring role, made in France by director Augusto Genina in two versions: silent and sound. The festival is showing the silent version (of course). Like all the festival’s films, this one will have a live musical accompaniment. See it, if only to admire Brooks’s trademark haircut.

The festival’s other great star is Greta Garbo, in G. W. Pabst’s “The Joyless Street.” (Pabst, by the way, directed Louise Brooks’s two best-known films, and co-wrote–with René Clair–the script for “Prix de Beauté”). The film has been restored from versions censored because of its sexual and social content. Asta Nielsen co-stars in this German production from 1925, set in Vienna in the post-World War I inflationary period.

Other well-known stars are Marion Davis, in “The Patsy” (1928), directed by King Vidor, and Harold Lloyd in “Safety Last!”, probably his best known film (from 1923), in which he hangs from the hand of a clock many stories up in a building–probably one of the most famous stills of the silent period.

Davies is best remembered as the mistress of William Randolph Hearst; but her skill as a comedienne shouldn’t be dismissed. In “The Patsy,” she plays a neglected younger sister in love with her more glamorous older sister’s suitor. In her efforts to be “beautiful and seductive,” she clowns around, imitating famous actresses of the time (Pola Negri, Lillian Gish), and managing to be both endearing and physically clownish. Marie Dressler co-stars as Davies’s monstrous mother.

Among the most beloved stars of the silent era (and overlapping slightly into the sound era) was Douglas Fairbanks, “everybody’s hero,” who is represented in Allan Dwan’s “The Half-Breed,” filmed in part among northern California’s redwoods. Fairbanks plays a half Indian outcast in this film based on a story by Bret Harte, years before the star’s huge successes in swashbucklers such as “The Three Musketeers” and “The Mark of Zorro.”

Another American star of the silent era is Winsor McCay, who was not an actor but rather an animator, creator of Little Nemo and Gertie the Dinosaur, among other beloved creatures. Several of McCay’s short films will be presented together with illustrations from a biography of the artist by John Canemaker.

“Kings of (Silent) Comedy,” with shorts starring Charlie Chaplin, Charley Chase, Buster Keaton, and Felix the Cat, should appeal to the whole family.

Other films come from from Britain, Japan, Denmark, Bali (that’s right, though it’s directed by Henri de la Falaise, a Frenchman and one-time husband of Gloria Swanson), the USSR, Germany, and Sweden. I was able to preview “Tokyo Chorus,” directed by Yasujiro Ozu, who later made a name for himself as the director of films such as “Tokyo Story” and “Early Spring” in the 1940s and 50s.

The 1931 silent is a charming comedy of family life. The modest young hero (Tokihiko Okada) gets fired from his job in an insurance company for defending a colleague. Unable to buy his son the bicycle the boy craves, he struggles to find new employment, even accepting a job that his wife feels is beneath him. The children are mischievous, the parents harrassed in this realistic and warm-hearted film.

A comedy from the newly-formed USSR (“The House on Trubnaya Square”), a German social drama based on an 1892 play by Gerhart Hauptman, that Balinese film—a tragedy shot in two-strip Technicolor—and a romance directed by well-known Swedish director Victor Sjöström are some of the other gems in this year’s festival. Music will be provided by some festival regulars, such as the Matti Bye Ensemble, the Club Foot Orchestra, and Mont Alto Motion Picture Orchestra, and others. The event will take place, as always, at San Francisco’s historic Castro Theater.

(27252)
$0.75 (as of January 21, 2021 - More infoProduct prices and availability are accurate as of the date/time indicated and are subject to change. Any price and availability information displayed on [relevant Amazon Site(s), as applicable] at the time of purchase will apply to the purchase of this product.)
related posts