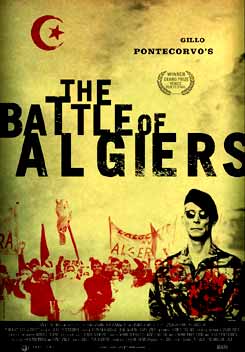 The Battle of Algiers, a film made four decades ago about a people in revolt against a foreign power occupying their country, remains astonishingly timely today. The parallels between the Algerian people in the 1950’s, using guerilla warfare and terrorist techniques to win their freedom from the French, and the incipient insurrection of present-day Iraqis against the American invaders of their country may differ in details, but the fundamental underpinnings of the two conflicts are strikingly similar–one country’s unprincipled domination of another for economic exploitation, triggering the power of the oppressed to wear down the superior resources of the oppressor.

But The Battle of Algiers, while having the verity of a documentary, is no tedious treatise on political economics. On the contrary, it is a superbly recounted story with the narrative drive and emotional charge of a great thriller. Gillo Pontecorvo was nominated for Academy Awards for directing and for co-writing the film. Both he and Kubrick, the latter for the visionary 2001: A Space Oddessy, lost out to Carol Reed that year. In retrospect, Reed’s sentimentalmusical, Oliver!, while well-realized, cannot approach the film pantheon to which both Algiers and 2001 legitmately claim entitlement.

The screenplay does not aim for characterization in the sense of standard drama; rather it pits a small, central group of Algerians in the liberation movement against the French Colonel Mathieu (Jean Martin), commander of the French forces in the city of Algiers, charged by his government in Paris with suppressing the simmering protest of the natives. Mathieu speaks the French right-wing line (though there certainly was left wing resistance in Paris, signaled here in Mathieu’s contempt for Jean Paul Sartre) and he has no compunction about using torture and shooting down innocent people in the streets. Ironically, he justifies what he does by his record of service against the Nazis, even as his Algiers campaign grows to be abhorrently unscrupulous.

But Mathieu isn’t a "character"–he’s a mouthpiece to articulate one of the two polarized sides in a conflict that forms the dramatic center of the film. On the other side is the FLN, the shadowy organization of Algerians organized in a tree of secret contacts, planning general strikes and ultimately planting bombs in the French sections of town.

Since the Casbah was turned by the French from a neighborhood into a contained camp, the FLN used their women, who more easily passed through checkpoints, carrying time bombs concealed in their handbags. The film depicts such an episode with a disciplined economy of storytelling and a mounting sense of anticipatory terror. When the bombs go off, the sountrack by the brilliant Ennio Morricone swells into a somber dirge. The deaths of innocent citizens, just a moment earlier dancing or drinking a coffee or reading a newspaper, are profoundly sad.

Then, in a later scene, when it is the Algerians who are victims of a French bombing, the same music is reprised. Such indiscriminate violence and death, Pontecorvo is saying, is tragic, no matter which side is the perpetrator. While the film surely has a slant of sympathy for the Algerians, its broader statement is a cautionary observation of the disintegration of civilized behavior and the loss of human values that result when nations box themselves into implacably opposed positions.

Jean Martin, who has appeared in many films but is primarily a stage actor, is the only professional actor in the cast. (He was blacklisted for signing a manifesto against the Algerian war.) The rest of the cast are nonprofessionals, but Pontecorvo’s directorial skill elicits naturalistic performances from all–there’s not a misstep among them. The black and white cinematography is notable for pioneering techniques that enhance the documentary texture of the film and Pontecorvo’s synchronization of the score and sound effects to the unfolding narrative adds considerably to its momentum and emotional intensity.

(28277)
$13.99 (as of January 24, 2021 - More infoProduct prices and availability are accurate as of the date/time indicated and are subject to change. Any price and availability information displayed on [relevant Amazon Site(s), as applicable] at the time of purchase will apply to the purchase of this product.)

$2.71 (as of January 24, 2021 - More infoProduct prices and availability are accurate as of the date/time indicated and are subject to change. Any price and availability information displayed on [relevant Amazon Site(s), as applicable] at the time of purchase will apply to the purchase of this product.)

(25661)
$23.81 (as of January 24, 2021 - More infoProduct prices and availability are accurate as of the date/time indicated and are subject to change. Any price and availability information displayed on [relevant Amazon Site(s), as applicable] at the time of purchase will apply to the purchase of this product.)
related posts