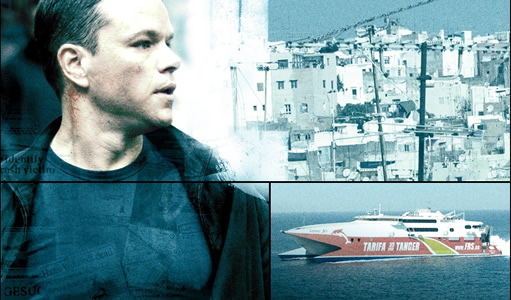 In 1968, the delicious Steve McQueen engaged in the delicious car chase in the delicious Bullitt. For the Baby Boomer generation it was (along with The French Connection’s) the most breath-taking chase we’d ever seen. And its most exhilarating moment was toward the end. McQueen, who was being pursued, disappeared from view, and then re-appeared in the rear view mirror of the bad guy. The hunted had become the hunter. I saw the film three times in theatres that year, and each time, at that moment, the audience gasped with delight and then roared their approval or burst into applause. The entire experience of a suspenseful chase had been elevated to a new, deeply satisfying level. Paul Greengrass, the director of The Bourne Ultimatum, understands the magic of that moment of inversion, and how it fits into the traditional action-adventure film.

Robert Ludlum’s novel The Bourne Identity appeared in 1981, sequels followed, and the first Bourne film arrived in 2002. While the novel had traditional thriller elements (the supposed good guys were often bad; agents lost their identity and their souls), the movie was clearly intended to be something different. Starring Matt Damon (hardly an action figure, and more known for being emotionally vulnerable if not frail, but intelligent and thoughtful), the first in the series was directed by Doug Liman, most famous for helming Swingers and Go. The next two entries featured an even more unusual choice for director- Paul Greengrass (Bloody Sunday and United 93). Clearly this franchise was looking to create a different type of action-adventure movie.

In fact, the ideas behind the Bourne series aren’t all that different or interesting. In the first film, Bourne has amnesia and has to deduce his identity while rogue CIA agents try to kill him. In the second, he has to confront his guilty past while rogue CIA agents try to kill him. Neither premise was original at the time, nor was it interestingly developed. Matt Damon was a serviceable hero, but not about to make us forget the younger Tom Cruise, Harrison Ford, Bruce Willis or Mel Gibson. But both Bourne films were enjoyable and surprisingly successful (surprisingly because Ludlum novels seldom do well as movies). And I think the reasons for their commercial and critical success are abundantly manifest in the new Bourne Ultimatum, the best film in the series and one of the best films of the year.

Again, Bourne tries to learn more about his true identity and face up to his guilty past- while CIA agents try to kill him. In fact, the film adds virtually nothing to what we already knew. He has the same type of flashbacks and guilt-attacks. The bad guys are centrally placed in the CIA. The power of the agency is focused on killing him and protecting their dirty secrets. The film waves at political relevance by referencing water-board torture and CIA murders that defy the law and morality. Now the two female CIA operatives who sought to nab Bourne in the last film switch course and determine to help him. And the Agency seems so technologically adept that we can’t believe Bin Laden ever eluded them.

So why were my wife, a packed movie theatre, and I completely enthralled with this film? Because it’s a testament to the old action-adventure movie which has been mostly eclipsed in recent years. For three decades after sound came to movies, we had heroes and anti-heroes who triumphed through their skills, grit, smarts, and determination. Then came Bond, and the hero had to share center stage with gadgets, explosions, special effects, high powered vehicles, and mind-boggling action scenes. This shared billing of heroes and gadgets produced some superb films (the latest Bond; the first Mission Impossible; just about anything directed by John Woo; and above all- Terminator 2) and an array of expensive and sloppy crap (anything directed by Michael Bay, except The Rock). But while ever more action films were being dominated by the technology, there were still a few franchises rooted in the traditional hero who relied on skill, stamina, and smarts (the first Die Hard and the second Lethal Weapon being the best examples). But until this year, it had been quite a while since we were blessed with conventional action movies. So, 2007’s Live Free or Die Hard and Bourne Ultimatum are a welcome delight for afficianados of the good, old genre.

Take one tiny moment that barely registers with the audience: Jason Bourne is fleeing the cops on foot. It’s an astonishingly well-choreographed chase over roof tops in Tangiers. As he runs by a clothesline, he grabs a shirt off it. Ten seconds later he takes a towel off another clothesline. Why? We don’t know, we don’t stop to think about it, we barely notice it. Then he comes to a ten foot wall with shards of glass embedded on the top. Bourne hurls himself up the wall, and we see his hands, wrapped in a shirt and a towel, vault him over. The pursuing cops can’t climb that glass-spiked wall. The chase continues, and this was only ten seconds in a ten minute blur of heart-stopping excitement. But at a visceral level, we know why Matt Damon is really right for this role- because he’s smart and that was a very smart thing to do. And at another visceral level, we know that Bourne didn’t use special gadgets or technology, but just good, old fashioned savvy and skill. Technology has little to do with his always thinking ten seconds and ten minutes ahead, always planning the next step, always alert to his environment, with its limits and possibilities. Bourne didn’t definitively define that kind of moment. Sean Connery did when he threw a heater into a bath tub to electrocute a killer in the opening of Goldfinger. Jackie Chan perfected it in countless fights where he would utilize whatever was lying around. But the Bourne movies continue with excellence this older tradition of action movies.

Which brings us back to Steve McQueen and that chase which inverted the power relationship between hunter and prey. Certainly it’s a staple in action movies for the hero to turn the tide at some point, get the goods on the bads, and triumph. But that’s a central element of the plot. In Bullitt, seeing his car in the rear view mirror, and knowing the victimizer was about to become the victim- was just a small moment in a sequence without much plot significance. But after churning our stomachs with suspense, we were given a momentary gift of joyous release. The Bourne Ultimatum teems with those kind of gifts. This movie is about its chases, though it has one fight which will rank with the best in screen history. And those chases are beautifully tense and taut. The audience doesn’t breathe. The theatre is completely still. It’s magical. And then we’re given the inversion. The hunted one is taking over. Perhaps. We’re not sure. We’re still panicing. But, my God, he was so smart and skillful in that moment. The joy is sublime. And so is this movie.