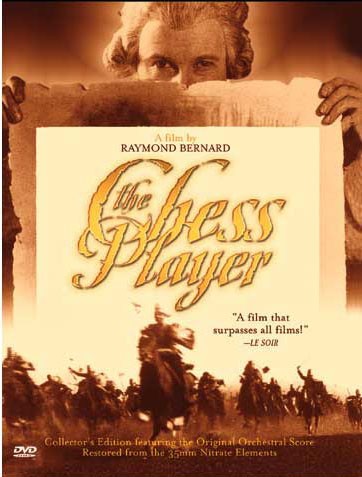 From the first images of Russian soldiers silhouetted in the shadowy Prussian city of Vilnius, to the opulence of royal drawing rooms that break away to the gut-wrenching battle scenes, Raymond Bernard&#146;s forgotten world cinema silent classic, The Chess Player, is a nonstop visual and aural masterpiece.

Shot on vanished locations in Poland, France and Switzerland, the film has been fully restored from the original 35mm nitrate master, with pristine sepia and silver gelatin tints and presented in fully annotated DVD packaging for modern audiences by The Milestone Collection.

Made at the height the European cinema renaissance in 1926 by La Societe des Films Historiques, toward the end of the silent era, The Chess Player is an exquisite example of what Alfred Hitchcock would call "pure cinema." Directed and written by Bernard and filmed by Joseph-Louis Mondviller and Marc Bujard, the film&#146;s narrative structure, artistic design and cinematography were an obvious influence on other filmmakers of its time and later. It goes into the pantheon of epic silent screen classics and has the visceral power of Eisanstat&#145;s Battleship Potemkin (1925) and visual grandeur of Abel Gance&#145;s Napoleon.

Composer Heni Rabaud&#146;s sumptuous score is filled with narrative evocation under the baton of Carl Davis, who specializes in re-orchestration of silent film scores, conducting the Orchestre de Radio-Television-Luxembourg. Like a great classical ballet, it magnificently supports the "pas de action" on the screen, whether it is tender prelude in a love scene or a rousing fanfare of soldiers going into battle or the witty cantata commenting on the complex social mores of the time.

Based on Henri Dupuy-Mazuel&#146;s novel, this drama blends fantasy with reality in recounting the 1776 uprising by liberationist in Poland against a ruling Russia that partitioned their country. It ponders the academic fantasy of what would happen if leaders of nations could settle battles other than with human lives, in this case on a chessboard.

Catherine the Great has annexed Poland, Luthania and Prussia under her rule, touching off civil unrest and divided loyalties.Polish nobleman Boleslas Vorowski {Pierre Blanchar} heads the resistance in Poland from his large chateau, after Catherine the Great commissions him with a regiment to test his loyalty. His friendly relationship with Russian officer Prince Serge Oblomoff (Pierre Batcheff) is shattered when he sees him embracing his sister, Sophie Novinska (Edith Jehanne) at her 16th birthday party.

Borrowing a page from the ballet Coppelia, inventor Baron Wolfgang von Kempelen {Charles Dullin} animates life-sized mechanized figures in his grand ballroom: loyal soldiers, empty-headed socialites, musicians, dancers and, rather creepily, a replica of a past love. When the inventor presents the automaton at a dance recital for the officers, a chess and drinking match ensues among the officers.There is an amazing sequence of the Pole and a Russian officer playing chess and getting drunk.It moves from drawing room revelry to a bloodthirsty brawl after a Polish ballerina dances for the officers and then is cornered by them, suggesting a possible rape.

The fate of Polish independence is decided when Catherine the Great summons the Baron’s life-size automaton called ‘The Turk," a chess master, for a command match.After Vorowski is wounded in battle he hides in The Turk and the fate of his country is once again in his hands. Blanchar is particularly effective giving the hero quiet, interior dimension.Contemporary audiences are now cut off from the art of silent screen acting and this movie is a good way to re-connect with a forgotten technique of performing.

Not unlike modern blockbusters The Chess Player has great special effects by W. Perey Day, which like those in Fritz Lang&#146;s Metropolis have lost none of their luster over time. In fact, they are even more impressive considering when they were devised.

The fight and battle scenes are grand in scale and brutal in depicting the violent realities, Bernard employed thousands of extras from the Polish cavalry and at points sequences even have an experimental feel. It is remarkable even at this early cinematic date, for instance, that Bernard uses a hand- held camera to get inside the action. The scenes of the Polish rebels trying to push the Russian army back fairly can be compared to the D-Day landing staged in Saving Private Ryan, with a viewpoint of showing the real cost of war.

(18723)
$4.89 (as of January 23, 2021 - More infoProduct prices and availability are accurate as of the date/time indicated and are subject to change. Any price and availability information displayed on [relevant Amazon Site(s), as applicable] at the time of purchase will apply to the purchase of this product.)

(9694)
$19.99 (as of January 23, 2021 - More infoProduct prices and availability are accurate as of the date/time indicated and are subject to change. Any price and availability information displayed on [relevant Amazon Site(s), as applicable] at the time of purchase will apply to the purchase of this product.)
related posts