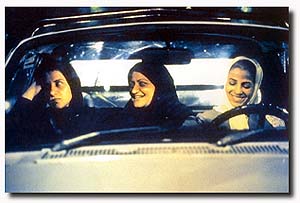 As the main titles run on a plain black screen, the soundtrack of The Circle blares the anguished screams of a woman in labor. It’s the only voiced scream that is heard in this moving and bitterly bleak film from Iran, but every one of the other women whose stories make up the film has an abundance of reasons to scream as well.

The new mother is never seen, but she has been cursed with a daughter, not a son, in this ultraconservative, Islamic theocracy, a society where women are little valued, except, perhaps, to give birth to sons.

Director Jafar Panahi patches together glimpses at moments in the lives of eight women as they struggle with powerlessness against an authoritarian system that generates a constant and pervasive sense of threat with no possibility of escape. Three of the women have just come out of jail for offenses that are never revealed and a fourth has a prison record. That may not have been the strongest tack for Panahi to take, since their unnamed offenses lead to speculation about their culpability. In the end, though, it doesn’t matter; even convicts deserve a better chance than any of these women get. They’re in prison whether behind bars or not. In this hell, all women are culpable.

Nargess lives on the hope of returning to her rural home which she has unrealistically idealized. Arezou gives her the bus fare, obtained illicitly in an untold way, but wise Arezou is unwilling to risk the disillusionment of reaching the promised paradise. Every time one of the women makes a move, the presence of police intrudes. The women have no identification papers, no money, no rights. They are circumscribed by restrictions–women can’t travel without papers, can’t smoke on the street, can’t visit a hospital without wearing a chador.

Pari, pregnant from a liaison with a lover who was executed, is unwelcome in her father’s home and threatened by her own brothers. Cast out, she seeks assistance from Elham, another prison friend, who refuses to help from fear of destroying the new life she has found–dependent on a man of course, the Pakistani whom she has married.

Nayareh, with profound anguish, abandons her small daughter on the street; a single mother, she believes the only hope for the girl is that she will find a family. And Mojgan, a prostitute, bitterly observes the pervasive double standard, clings stubbornly to her pride, and winds up in jail, completing the circle. It is a La Ronde of despair, unleavened by comic relief, edgy and threatening; it is a Brave New World without the technology or the escape of drugs, the 1984 of the jihad–except it’s happening right now and, although the film is fiction, it is all too real.

The Circle never preaches. Panahi illustrates by incident and dialogue. With a gritty closeup view of life on the streets of Teheran and natural, deeply felt performances by the women, the film commands attention through its convincing detail and the unaffected honesty of its presentation. It’s bleakness is not an existential pretension–it is the actuality of these people’s lives.