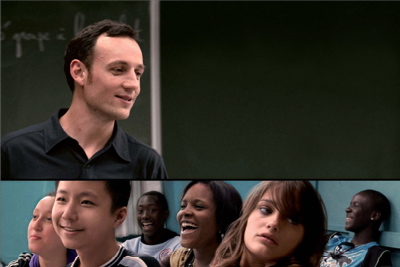 Maybe it’s because I’ve been considering the idea of becoming a high school teacher; maybe it’s because I have a middle-school aged daughter; or maybe it’s just because I have a soft spot for brilliantly realized slice-of-life stories—whatever the reason, I loved this movie about life in the classroom in a Parisian middle school. I’m not the only one—The Class won the Palme d’Or at last year’s Cannes Film Festival, and is this year’s nominee from France for an Academy Award for best foreign film.

The movie is based on an autobiographical novel about a year in the life of a middle-school teacher, François Bégaudeau. What sets it apart from other book-to-screen adaptations is that the author of the book plays himself in the movie, and he is every bit as charismatic and natural in front of the camera as a seasoned professional would be. The same is true for the other non-professionals who make up the rest of the cast, especially the eighth-grade kids in François’s classroom. (It makes you wonder why anyone bothers to go to acting school. You’ve either got it or you don’t.)

Of course, it helps when you’re playing some version of yourself, which is pretty much what everybody is doing. Even so, the film’s narrative is fictionalized, the dialogue has been scripted, and these people are, indeed, acting—they are “pretending” to be in a real classroom, and are pretending that the cameras aren’t there as they speak their lines. Nevertheless, The Class is distinguished from most fiction movies in its close proximity to real life. It’s a hybrid movie—half fiction and half documentary, one illusive step away from reality television.

The director, Laurent Cantet, and Francois Bégaudeau used the novel as a starting point, and along with Robin Campillo developed the script through a series of workshops they conducted with students from the Françoise Dolto Middle School in Paris’s 20th arrondissement over a period of nine months, an entire school year. There, Cantet and Bégaudeau helped the students develop their characters, improvise scenes, and even create their own dialogue. Once shooting began, Cantet started filming the classroom scenes with three HD cameras going at once, so he could capture the conversations between François and his students at the same time. The cinema-verité style of Cantet’s directing —lots of hand-held camera, spontaneous filming, and shooting in “real time”—adds to the feeling that we’re watching a documentary. This is what makes the film so remarkable; you feel like a fly on the wall of that classroom, or maybe seated in the second row.

The kids in François’s classroom are for the most part immigrants’ children with names like Souleymane and Wei and Esmeralda, whose parents came from places like Cote d’Ivoire, Jamaica, and Mali. Most of the teenagers speak a colloquial French that is riddled with slang expressions and syntactical and grammatical nonchalance—much like the urban speech of America’s street teen culture—and for many of them French may not be their first language. Because François is a French teacher, whose job it is to teach them how to speak and write “proper” French, a lot of the classroom conversations, and humor, step off from the language. Even though the examples used in the film lose something in translation—there is no English equivalent to the French subjunctive, and all the translated jokes about conjugations aren’t nearly as clever as they are in French—the sense that there is a class division that the culture’s language helps define is universal. Even viewers who have to rely on the subtitles will get that much. They might not, however, be able to relate to the French insistence on the formal address between students and teachers. When François takes one of his more disruptive students, Souleymane, to the principal’s office, he glosses over Souleymane’s aggressive outbursts, and concentrates on what appears to be the ultimate transgression. “Il m’a tu-toyé,” François says to the principal, which means Souleymane used the familiar form of address. My god, I thought, at least the boy didn’t hit anybody. At least the school doesn’t need to put in a metal detector at the entrance.

On paper, The Class may appear to be a social commentary on the plight of immigrant teenagers in France, but the film really has a global reach. It doesn’t feel French at all in many ways, especially when it comes to the kids—their rebellious, narcissistic and often insufferable behavior could be describing adolescence anywhere. The classroom scenes are full of incidents where the kids are just being kids—obnoxious, naïve, judgmental, insecure, indifferent or over-reactive. One of Francois’ most outspoken students, Esmeralda, is so rude and mouthy that he confronts her after class, demanding an apology. It’s one of those “lose-lose” situations that teachers (and parents, too) invariably fall into, when anger influences them to abuse their role. The apology François finally forces out of Esmeralda is lip-service at best, and afterwards, she leaves with one of those “ha-ha, I didn’t mean it” lines that would drive anyone to the nearest unemployment line. It certainly had me reconsidering a teaching career. In the film, Francois puffs on a cigarette on his break, and another teacher goes berserk in the teachers’ lounge, spouting an expletive-riddled tirade about his own students, as the other teachers watch in silent empathy.

When provoked, the students are quick to challenge François’s position of authority as the classroom teacher, and so François must walk a thin line between trying to get them to come out of their teenage stupor and not letting them go too far. It is this student-teacher tension that brings the film to its pivotal scene, one that has a special ring of truth to it, in all its inconclusiveness.

And yet, even as we witness these unruly students and their overwhelmed teachers, the movie still uplifts us with its underlying theme of learning through engagement in conversation. At the heart of The Class is an exciting rapport between a teacher and his students, one in which language and ideas are constantly being tossed about and questioned, and eventually at least partially absorbed. It’s not a perfect academic environment, but it has its moments. In a life full of disappointments and failures, those aren’t bad odds. We could all learn a little from The Class, so there will be no excuses. Attendance is mandatory, and reviews are due by Friday. (Just practicing.)