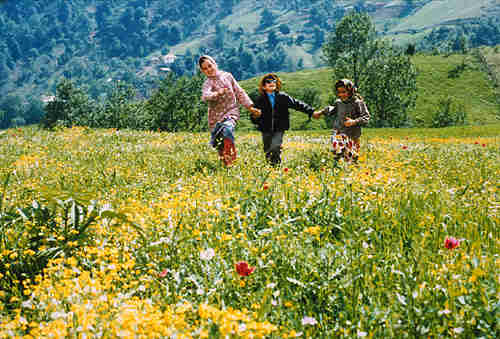 The Color of Paradise is about a blind boy who sees with clarity and his sighted father who is blind to the beauty in his own family. It is a film made from a deeply spiritual point of view, but it never proselytizes, it never preaches. It tells with sophisticated simplicity a not so simple story of faith and unconditional love and the sadness that comes to one who falls short in both.

Mohammad (Mohsen Ramezani) is eight years old and resides at a school for the blind in Tehran, where director Majid Majidi lingers to provide a sense of the lives of these children, cooperatively leading one another about, learning to read and write in Braille. In an extraordinary scene Mohammad finds a baby bird on the ground. With gentleness and determination he climbs a tree to replace the chick in the nest from which it had fallen, all by use of his sense of hearing and his sense of touch. Majidi establishes with economy and pure narrative the character of the boy – a selflessness, a respectfulness, a deep sense of kindness.

It is vacation time; school is closing. Mohammad’s father (Hossein Mahjub) arrives late to pick him up and inquires whether Mohammad can remain at the school. When told that would not be possible, he reluctantly takes his son on the journey to their rural home, shared with an adoring grandmother and two young sisters. They not only love Mohammad, they see him as a whole person, not the handicapped liability his father considers him to be.

With a camera that worships the beauty of the countryside and a storytelling sensibility that takes its time to let us see the activities of day-to-day life (growing grains, creating dyes from field flowers, rebuilding the mud and thatch walls of a home) this morality tale of father and son is spun with skillful attention to detail and deliberate pacing towards what seems an ineluctable conclusion. While the loving characters of the boy and his grandmother are easy to buy into, the motivation for the father’s bitterness is less than fully convincing, especially in the context of such a powerfully family-oriented society.

But that is a relatively minor, though noticeable, weakness in a film that lets you hear as a blind child hears – the sounds of birds, of a donkey braying, of a gathering storm. It’s a film that makes you feel the sensation of water running through fingers, of a hand running over ripening grain in the fields, of pounding out the patterns of Braille in dough rolled out for baking. Rooted in deep spiritual belief, Majidi still does not fail to note the superstitions that also power these country folk. With strong narrative drive and a natural eye for imagery, Majidi is a filmmaker whose ninety-minute work is rich and satisfying, unlike the bloated two-hour and longer opuses hitting the market in recent months that seem so empty, so lacking in conviction.

When the children are taking dictation to learn their Braille toward the beginning of the film, the teacher recites (presumably from the Koran) a line to God: "You are both seen and unseen." Later, in a deeply touching moment, Mohammad says the misery of being blind is not being able to see God. His teacher told him, he says, that God is invisible anyway, and that he can see God with his hands. Mohammad does see God with his hands, Majidi makes eminently clear, because Mohammad is blessed with God in his heart.