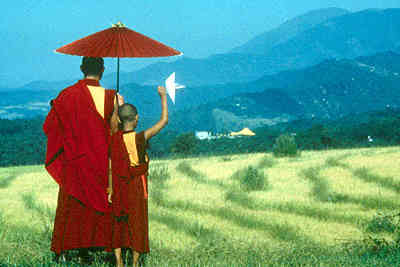 Beyond the Sky and the Earth: A Journey into Bhutan

So Close to Heaven: The Vanishing Buddhist Kingdoms

of the Himalayas (1996), Barbara Crossette

At first glance, a synopsis of The Cup – a Bhutanese comedy about Tibetan Buddhist soccer fanatics &#150; sounds like the ultimate in concept gone wrong, something that might have resulted from a peyote-fueled game of Mad-Libs in a late-night film school brainstorming session. But, remarkably, the film is an improbable fusion of uncommon components that somehow comes together in very satisfying fashion. It’s a peaceful and disarming tale that illuminates the Buddhist beliefs it also gently chides.

Two young boys, Palden (Kunzang Nyima)and Nyima (Pema Tshundup) have escaped from Tibet to arrive at a Buddhist monastery-in-exile nestled in the Himalayan foothills and receive their ordination. They may have entered the monastic life, but they’re also still teenagers – they cut up during prayer sessions and smuggle magazines with swim-suited women into their quarters. They’re especially intent on following the 1998 World Cup soccer finals, so they join forces with another initiate, 14-year-old Orgyen (Jamyang Lodro). He’s also a huge fan – under his robes, he wears a hand-made Brazil jersey inscribed with Reynaldo’s famous #9. After curfew, this covert group sneaks into town to watch the games on TV at a local tavern, much to the consternation of their Abbot (Lama Chonjor, a real-life Abbotof Chokling Monastery). The monastery’s Disciplinarian, or "Geko" (Orgyen Tobgyal), thinks that if the boys are allowed to watch the final match (he describes it to the Abbot as "a fight – two nations fighting for a ball") between France and Brazil, their attention will turn back to their religious studies in earnest. He convinces the Abbot to allow Orgyen to arrange for rental of a television and satellite dish, and the conflict between the spiritual and the secular begins.

The story moves quite slowly, it’s almost an hour before the quest to obtain the TV gear begins. But writer-director Khyentse Norbu uses the languid tempo to effectively bring us into the unhurried cadence of monastic life, showing the benefits of living at a much slower pace. Humor is abundant, all of the wry and thoughtful variety – no car chases or pratfalls here. In a touching scene, the power goes out during the big game and the monks amuse themselves in the interim with a candlelight hand shadow show. Director of photography Paul Warren gives the film a warm and attractive look despite the technical challenge of shooting in 16mm enlarged to 35mm.

The cast of The Cup was mainly drawn from members of the Chokling Monastery. None had any previous acting experience and most could not understand Norbu’s script, which was written in English. Scenes were translated and learned just before shooting. As a result, most of the performances are about what can be expected from amateurs appearing on camera for the first time. Most dialog exchanges don&#146;t flow particularly smoothly, but within the film’s leisurely pace these seams disappear. Orgyen Tobgyal as Geko and Jamyang Lodro as Orgyen are both particularly engaging. Interestingly enough, they are father and son.

Norbu has strong religious connections; he’s a Bhutanese high lama who spent most of his life in Tibetan Buddhist monasteries and was once a Geko himself. His filmmaking experience began when he worked as an apprentice for Bernardo Bertolucci on Little Buddha. For this, his first full-length feature, many decisions were made using the ancient Tibetan Buddhist divination system of mo – from his film stock and casting choices to the selection of a the starting date-for shooting. When murky clouds and power blackouts posed serious threats to the production schedule, he conducted ritual prayers to clear the skies and stabilize electrical currents.

By the conclusion of the film the audience is left with the overwhelming feeling that perhaps being on time for that next 7:00A.M. meeting isn&#146;t the most important thing in the world. Contemplative and introspective, The Cup is a glacier of a film &#150; moving unhurriedly but with great power and force. Anyone accustomed to a steady diet of John Woo and MTV may find it too sluggish, but those willing to accept its placid pace will find it a rewarding journey.