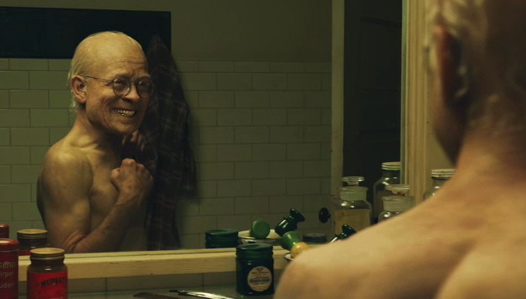 The Curious Case of Benjamin Button (2008)

The Curious Case of Benjamin Button may be a Brad Pitt vehicle, but fans of the former Sexiest Man Alive will have to wait an excruciatingly long time for him to start looking sexy again. And yet, in an ultimately poignant and satisfying thematic twist, that is the point. The sexy years are never as long as we want them to be. Life is brief, and in that short span, old age lasts forever. This is what The Curious Case of Benjamin Button leaves us with—a melancholic reminder of the transience of life, and the mutability of this mortal flesh.

The movie has an odd way of turning profound and metaphysical on us, with its fairy tale premise spiced with a Southern Gothic atmosphere and director David Fincher’s technological brilliance in deftly employing the latest in digital special effects. The premise, taken from a short story by F. Scott Fitzgerald, is simple enough. A man, Benjamin Button, is born looking old, and gradually grows younger and younger in appearance as he gets older and older, until he finally becomes a newborn child on his deathbed. The special effects are amazing—for the first hour, Brad Pitt, who plays Benjamin, is in full makeup and his head is digitally attached to bodies of various heights, so that we barely recognize him. We’re nearly halfway through this almost three-hour movie before its star looks more like the matinee idol we know him to be, and is able to act with his whole body. Brad Pitt still looks like a much older man when Benjamin reaches full growth, and it will take another decade and several scenes before we get to see that gorgeous mug.

For anyone curious to know just how young the digital hocus-pocus can make Brad Pitt look, the answer is younger than anyone might have guessed. Right before it’s necessary to replace his character with boy actors, Brad Pitt looks eerily like the young hustler he played in Thelma and Louise some eighteen years ago. Cate Blanchett, who plays Benjamin’s lifelong love Daisy, also gets a nice touch-up in her early scenes as the fresh-faced young woman who beguiles Benjamin with her beauty and spirit. The Aussie beauty hasn’t looked this young in maybe…ever. We humans may not have discovered the fountain of youth yet, but the movies have.

At the heart of The Curious Case of Benjamin Button is the ill-fated love story between Benjamin and Daisy, and the special effects add a literal intensity to the knowledge that their ages commingle in physical—and sexual—harmony for only a brief time. One of the best scenes in the movie is when Benjamin returns to visit Daisy, after having left her and their daughter in order to free Daisy of the burden of his inevitable descent into the physical dependence of childhood. Daisy is at the cusp of old age herself when he returns, and yet she is still sexually drawn to a now barely legal version of the older man she fell in love with as a young girl. It’s a sad scene; here are two people who obviously love each other, but Father Time, as usual, has come to muck things up.

Benjamin Button’s life is told from start to finish; it’s a long life that stretches across nearly a century, and since Benjamin’s time with Daisy takes up only a portion of that life, the movie is stretched out with a formula that seems to have been cloned from Forrest Gump; not too surprising, considering that the screenwriter, Eric Roth, also penned that other epic life story of a Southern-bred oddity. The movie starts deep in the heart of old New Orleans, with the circumstances of Benjamin’s birth. His mother dies during labor, and his distraught father (Jason Flemyng), horrified by the withered face of his newborn child, abandons him at the doorstep of a nursing home, whose caregiver, Queenie (Taraji P. Henson), finds him and adopts him as her own son. Benjamin spends his childhood, aptly enough, among the aged residents of the nursing home, and the movie’s first hour is a languid, often humorous, but never really engaging series of the slightly grotesque personalities that Benjamin meets in this revolving door of old age and death. When Benjamin reaches maturity, the sea beckons, and he leaves the old folks’ home and old age for new adventures in distant places. Such a plot line allows him to witness a great war battle in the Pacific (and give Fincher another reason for more digitally magnificent shenanigans), and to take him to the exotic locale of a Russian outpost (don’t ask), where he has a brief love affair with a married Englishwoman (Tilda Swinton, riveting as always.)

There’s even Benjamin Button’s voice-over narration to tie it all together; but the comparison to Forrest Gump is, in the end, somewhat misleading. Whereas Forrest was an active protagonist in his life story, Benjamin remains a passive observer in every episode of his own life. The movie is not about Benjamin leaving his mark on the world, or rising above his abnormality; in fact, it takes great pains to remind us of our inevitable powerlessness to change life’s course of events. There is a somber quality to the movie, and a passivity to Brad Pitt’s subdued performance, suggesting that whatever joy there is to be found in life comes in brief spurts and not necessarily from our own doing. The key is to enjoy those brief wonderful periods when they come, and allow them to disappear when they must. If nothing else, Benjamin seems to know from birth that regret is futile, a waste of precious time. Even moving backwards, time waits for no one. Certainly not for Benjamin and Daisy’s daughter (Julia Ormond), who appears to be a dour and rueful middle-aged woman when she reads Benjamin’s diaries out loud to her dying mother (Cate Blanchett in full old-age decrepitude) in the movie’s framing device. The movie is in many ways a lesson for her, and all of us who live with regret, missed opportunities and thwarted dreams. “I hope you’re proud of who you’ve become,” Benjamin writes to his daughter in his diary, “and if not, I hope you have the strength to start all over.”

By having to move through life backwards, Benjamin Button is forced to spend his own life perennially starting over. In a bizarre twist on Wordsworth’s line, “the child is father of the man,” Benjamin’s story tells us, in reverse, what old people are cajoling us about all the time. Life is full of sorrowful moments, and moments of great joy, and then you die. None of it lasts forever, so don’t sit around and mope. Get on that boat, or motorcycle, go find that ballerina in New York, let that drunken Irish tugboat driver buy you a drink, and for god’s sake, don’t count those wrinkles. It’s a waste of precious time. Whether or not it’s worth spending a mere three hours watching a movie that reminds you of this is something I’ve already spent way too much time thinking about.