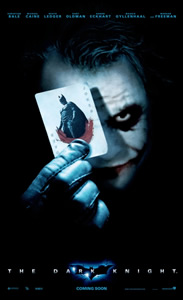 The Dark Knight, director Christopher Nolan’s much-hyped, long awaited second entry in the Batman franchise, is not only fabulous and the best film of the summer, it’s possibly the best film of the year, a guaranteed mammoth hit. It’s an accomplished, thoroughly satisfying, edge-of-your-seat suspenseful, high-end commercial entertainment whose action rises out of well-crafted drama. Nolan and his co-writer/ brother Jonathan’s shrewdly constructed, fast paced script, which is witty without being glib, races along relentlessly even with a two and half hour running time The whole enterprise is stripped down and swift like a high performance sports car with a supped up engine.

Hamstrung by his own basic decency when fighting the Joker, an elusive, unfathomable villain who thrives on mind-games and pointless violence, this brooding Batman, a conflicted super hero without super powers, embodied by the darkly mysterious, sleekly handsome, Christian Bale, is a match for the troubled gestalt of our time. The Joker plays on the instinct for self preservation at the expense of others, posing an insidious ethical challenge: What are we willing to do to be safe? His price for stopping the crime wave and carnage he has unleashed on Gotham City’s populace: Batman must surrender and reveal his identity.

Asexual and remote, the suave, rich playboy Bruce Wayne A.K.A. Batman is a lost boy who hasn’t gotten over the murder of his parents and is compensating for that early helplessness with his compulsion to save Gotham from the criminal element. He also has a set of familiar problems. His obsession with “work” has had an adverse effect on his love life, personified by his childhood flame, ADA Rachel Dawes (the lanky Maggie Gyllenhaal, a major step up from the excessively pert Katie Holmes), who has moved on to someone else.

The only weak link is Aaron Eckhart’s Harvey Dent, the crusading, ambitious DA and rival for Rachel’s affections. In an unwise career move, Dent (the White Knight) becomes a pawn in the war between the two adversaries. Eckhart, who brings little more than a toothy smile and his square jawed, cleft chin good looks to the table, has made a career of bland, roguish charmers but that easy amiability doesn’t suffice for a character capable of the jarring duality of Two-Face.

Bale is unknowable here, perfect for the role of a man who is a stranger to himself and only comes alive when he pretends to be someone or something else. He has a perfect foil in the late Heath Ledger’s Joker, a psychotic, sarcastic motor mouth and master of mayhem prone to spouting metaphysics, who, at one point, shows up in a nurse’s uniform and wig. Ledger is insanely good and genuinely scary in a tour de force performance. (His is a full fledged character in contrast to Jack Nicholson’s mugging parody.) Ledger could have written his own ticket after this outing, had he lived.

It wouldn’t be the first time that the villain of the piece was more psychologically compelling than the hero who remains opaque and impenetrable, which is just what we want Batman to be.

The performances both in front of and behind the camera are uniformly good. Morgan Freeman, Michael Caine and Gary Oldman, return in fine form; cinematographer Wally Pfester and production designer Nathan Crowley create a menacing universe of perpetual night plagued by uncertainty, at once fantastic and believable. The stunt work feels authentic and visceral, with less CG than audiences have come to expect from the genre. The rousing score by Hans Zimmer and James Newton Howard amps up the suspense and raises the stakes, without resorting to cheap sentiment. The overhead aerial shots of Hong Kong and nighttime Gotham are thrilling as are the heart stopping aerial stunts which achieve maximum impact when seen in IMAX.

Now, if only Batman could rescue the economy.