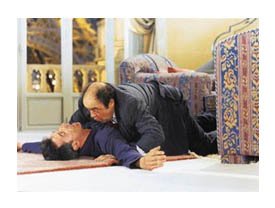 Farce is a classic comedy form employing extreme exaggeration, improbable incidents, and, often, a very rapid pace with slapstick physical elements, so that the viewer doesn’t get a chance to think too much between laughs. Believability of incident is cast to the winds and suspension of disbelief is assumed, in favor of piercing the pompous with the accuracy of the barbs. It is a perilous form; if comedy is always more difficult to create than drama, farce is yet more elusive than ordinary comedy. It requires perceptivity, impeccable timing, and a ready store of wit if it is not to sink of its own silliness.

The Dinner Game arrives from France armed withCesar (French Academy) awards and the reputation of its writer/director, Francis Verber, who has made a career out of his participation in multiple versions of La Cage aux Folles and a bunch of lesser comedies. Interestingly, four of Veber’s other French comedy films were remade in English language versions, indicating a perception in Hollywood that foreign language comedy may present difficulties due to language and cultural differences. If titles like The Toy, Pure Luck, Father’s Day and Three Fugitives bring you joyful memories of carefree laughter, then maybe you will enjoy The Dinner Game. (As it turns out, The Dinner Game will be remade in an English language version, too, with the unfortunate title, Dinner for Schmucks. Alas, vulgarity knows no international boundaries.)

The premise here is that a group of wealthy friends periodically throw an "idiot dinner," a party to which each must bring the most boring or stupid guest he can find, competing to see who can find the most foolish idiot. The concept is discomforting, rooted as it is in an attitude of arrogant superiority, but this is farce, and supposedly the perpetrators are to be hoisted on the petard of their insensitivity. (Sadly, we are told that the idea was inspired by a real-life game played in Paris.)

As it turns out, the premise is merely a plot device to bring together Brochant (Thierry Lhermitte), a publisher, and the "idiot" he has found to bring to the nights’ revelry, Pignon (Jacques Villeret), a government accountant whose hobby is building matchstick models: the Eiffel Tower, the Concorde, the Golden Gate Bridge. Brochant throws his back out and they never do go to the party, which may or may not have made a better movie.

Pignon, at Brochant’s elegant apartment, proceeds to involve Brochant in a mildly outrageous series of complications with his wife (who has just left him), his mistress, his best friend, and a tax inspector (Daniel Prevost). The incidents are silly, errors compounding errors, appropriate to the farce form. Brochant is mean and dismissive towards Pignon, which is built into the premise as well . He’s an utterly unlikeable fellow. And Pignon turns out to be the only character in the film of any complexity and interest, the only one who is likeable – he’s sensitive and smarter than he appears, though, in the end, he is still an idiot. It all fits according to the farce schema.

Trouble is, it just isn’t funny enough. There are some laughs, but not enough to sustain interest – even for the movie’s relatively short 82 minutes. The targets are the obvious ones, the turnabouts are fairly predictable, the wit is thin. As a result, there are too many stretches that induce more yawns than giggles.

The film is based on a play; the screenplay and director make little effort to "open it up." Almost the whole time you are in that lovely, but confining apartment, just as it must have looked on the stage of a theater. All too often that brings in the telephone as the means of communication, as the tool to keep the plot moving forward.

If the film has one genuinely redeeming quality, it is in the performance of Jacques Villeret. Villeret creates a warm, sympathetic, and very human fool and he has the timing down to a tee. With a bald pate and frizzy side hair, his face has the plasticity of silly putty, changing expression and mood instantly to reflect the quickly unfolding chain of events. Just when he has demonstrated some cleverness, when a certain glow of having done something right lights up his face, he inevitably messes it up and torpedoes his own accomplishment and the face falls, like a collapsed souffle. An idiot, indeed, but a lovable one – and a splendid performance.