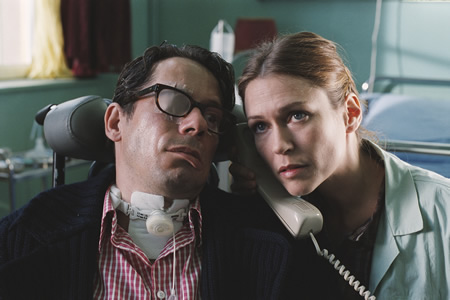 The Diving Bell and the Butterfly (2007)

Adolph Hitler’s second in command, Hermann Goering, used to say that when he heard the words "culture" and "art," he wanted to reach for his gun. Sam Peckinpah, director of some of the most artistically gratifying films in the American canon, liked to describe certain films he didn’t like as "artsy-crafsty jacksy-offsy." To label a film as "artistic" or an "art film" is usually to dismiss it as obscure, pretentious, inaccessible, mannered, and overly self-conscious. But I don’t know how to describe Julian Schnabel’s movies as anything other than artistic. He makes art films, in numerous senses of that word, and his latest film is his most fully realized and artistically accomplished to date.

In 1995, the forty-three year old, ultra-hip Jean-Dominique Bauby, editor of the ultra-hip magazine French Elle, had a massive stroke. It was of an extremely rare kind that left him with "locked-in syndrome." Completely paralyzed, he lost the use of all of his senses- except sound and sight in one eye; he was, for all intents and purposes, trapped within his own body. He did have two enormous assets: because of his wealth and social position, he received the best medical care imaginable, and his mind was intact. But as he discovered and we begin to realize, having a fully alive mind in that situation might be more curse than blessing.

At this point, we know the two paths open to this type of film. Either Jean-Do (as his friends called him) would never give up, work hard, and recover- think the last nine movies on the Lifetime or Oxygen channels. Or, because of his strong sense of dignity, he would rather die than live in this condition- think Richard Dreyfus in Whose Life is it Anyway or Javier Bardem in The Sea Inside. But Jean-Do’s life was going to take a different trajectory. Without ever escaping the confines of his mind-bogglingly limited situation, he found a way to live through his mind.

His first asset was the above-mentioned medical care. Doctors fussed over him, personnel helped care for his inert body, and most importantly, a therapist taught him to communicate by blinking his eye. This laborious process involved her reciting the alphabet, starting with the most commonly used letters. When she said the letter of a word that he wanted to spell out, he blinked, and then she moved on to the next letter. This became his way to attach to the world beyond his inner self. And with the help of a literary assistant, he actually began work on a book.

As he tells us, his mind moved in two directions: back through his memories and forward through his imagination. Soon Jean-Do began to live a very limited life outside of himself, by watching and listening to his children, for example. And his life of the mind was free to roam and create, but then had to focus on the arduous task of turning his thoughts into the graceful and moving prose that would become his critically acclaimed bestseller: The Diving Bell and the Butterfly. The "Diving Bell" is his metaphor for his isolated and submerged existence. He can never, literally, touch the world. But for all that terrible isolation, the "butterfly" represents his mind when it takes flight through memory and imagination.

But can this be enough to sustain life? Is such an existence bearable, let alone meaningfully and recognizably human? Jean-Do’s emotions vacillate. And each of us would probably respond differently to this impossibly difficult and impossible to grasp situation. As we watch the film, we inevitably create our own parallel existence to his; imagining how we would react to this Cartesian existence of a life overwhelmingly inside our mind. We wonder how many regrets we would have, for example, if we awoke tomorrow morning after being in a coma? How many opportunities have we missed? What would we think about never again touching or being touched by another human being? But regardless of how we imagine that we would feel or act, we cannot help but be moved by the decisions Jean-Do cobbles together from his limited choices, and moved by the aspects of his existence that he manages to affirm. Even at those moments when death is near, he neither welcomes it nor fears it, but simply integrates it as one more dimension of his strange existence.

We shouldn’t be surprised that Julian Schnabel would be attracted to this material. His first film was about the artist Basquiat who could not escape the confines of his depression and drug addiction. His second film about the Cuban poet and novelist Reinaldo Arenas depicts the artist’s struggles against the restraints of a Communist government and later with AIDS. Jean-Do is the latest of Schnabel’s artists who create in the context of being constrained and, ultimately, betrayed by their own bodies.

But labeling his films as "art" is less about the subject matter and more about his technical choices. For example, Schnabel forces us inside Jean-Do’s mind. The film opens as he opens his eyes after weeks in a coma, the subjective camera showing us exactly what, and only what, he sees. Our eyes are as confused about what we’re seeing as are Jean-Do’s. And as his mind thinks aloud about its confusions, our minds also attempt to make sense of this strange existence. Schnabel sustains this eerily subjective experience for a third of the film, and our moods slide from fascinated to depressed to angry to bemused. Only when we have become accustomed to living in the world of Jean-Do are we permitted other camera angles and perspectives on his life.

And as Jean-Do begins to adapt and becomes less self-referencingly childlike, we begin to experience and think about the world outside of him. We see his father and children, the mother of his children and his mistress, friends and physicians. And Schnabel captures the process of simply trying to remain sane in this truncated reality, while simultaneously trying to conceptualize it in the elegant prose that slowly forms his book.

Schnabel has constructed his film with the same anguished care that Jean-Do painstakingly poured into his work. And Schnabel has taken risk after risk. The camera work is demanding and requires a leap of patience on our part. Schnabel studied French so he could work with his French cast, and shoot the film in French with subtitles- as uncommercial a decision as he could possibly make. There are excruciatingly painful moments for Jean-Do and others, but the film doesn’t try to soften them by becoming either sentimental or melodramatic. To be fair, Schnabel benefits from a beautifully creative script by Ronald Harwood (The Pianist) and the incomparable cinematography of Janusz Kaminski (Schindler’s List and Saving Private Ryan). But the completed work belongs to Schnabel. In the poetry of its images, the psychological depth of its dilemma, its humane affirmations, and its rare capacity to translate tragedy into something fine and even exhilarating, it is a work of art, with no apologies for that word.