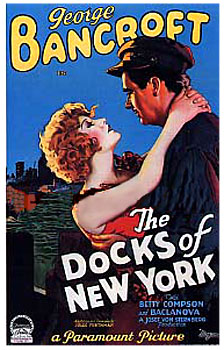 The Docks of New York.is one of Josef von Sternberg’s lesser seen yet most accomplished works. All of von Sternberg&#146;s best traits are found here &#150; ravishing mood and atmosphere, sensual photography, and the conference of iconic status onto his actors &#150; without pushing that style and the accompanying story beyond the breaking point, a malady that would infect some of his later work.

More than half of The Docks of New York is devoted to the events of a single night of rampant orgiastic indulgence in a grimy dock saloon.On his single day of shore leave, rugged stoker Bill Roberts (George Bancroft, Stagecoach) saves Mae (Betty Compson) from drowning when she throws herself into the river in a suicide attempt. Lou (Olga Baclanova, Freaks), a prostitute, goes out of her way to help Mae out even as Lou&#146;s long-lost husband, Andy (Mitchell Lewis), reappears after a three-year absence.

Bill is big and tough enough to shove everyone around, and when Andy tries to make a move on Mae, Bill floors him without flinching. Mae is wistful about her savior and protector who tells her, &#147;I&#146;ve sailed the Seven Seas and I&#146;ve never once seen a craft as trim as you,&#148; though his arm sports tattoos galore of past female conquests. When he proposes on a lark after having drunk himself senseless, Mae agrees to marry him right there before the salty bar crowd. Lou even contributes her own wedding ring. However, the next morning Bill barely remembers the previous night and is ready to induce another heartbreak as he has to return to his ship.

The entire cast shines. Bancroft comes off as such a physical roughneck, he looks like he has an extra layer of skin on him. He&#146;s got a John Wayne persona but with twice the bluster.Compson is von Sternberg&#146;s Marlene Dietrich stand-in before he even had Dietrich. Compson&#146;s Mae has all the tart sass and careless and carefree swagger of her German counterpart, but also an emotional vulnerability Dietrich never quite let on. Behind Mae&#146;s smirking veneer is an open and festering wound. The movie never tells the audience why Mae wants to die at the beginning, and it doesn&#146;t have to because Compson&#146;s performance is enough to make one believe.

Matching Compson every bit of the way is Baclanova. Lou is Mae&#146;s mirror image and both blond women hide themselves behind a coat of darkly comic cynicism. &#147;I&#146;ve had too many good times,&#148; Mae says to Bill while Lou warns Mae, &#147;Until I got married, I was decent!&#148; Everybody is so rough-hewn that the slightest display of tenderness &#150; whether Mae trying to sew Bill&#146;s pocket back on or Lou kissing Mae on the mouth &#150; speaks volumes.

The movie is silent, but the imagery is so powerful that the film feels loud. Much credit goes to cinematographer Harold Rosson and art designer Hans Dreier. Rosson shot such notable films as The Asphalt Jungle, Singin&#146; in the Rain, and The Wizard of Oz, but his lensing has never looked quite as exquisite as it does here. Having worked on Sullivan&#146;s Travels, Sunset Blvd., and Trouble in Paradise, Drier has an equally impressive resume and Docks of New York is still among his best works.

Together with von Sternberg&#146;s meticulous camera movements, this is one spectacular looking movie. Bill&#146;s cigarette smoke merges into the swirling dock fog, silhouettes abound in the stark moonlight, moisture glistens off Mae&#146;s skin, and when Bill shovels coal into a ship&#146;s furnace, he looks like he just stepped out of a volcano. One tracking shot occurs across mirrors, yet von Sternberg manages to find an angle where the equipment and crew doesn&#146;t appear in the frame.

If The Docks of New York has a problem, it is that it&#146;s too short and ends rather abruptly. When cinema is this evocative, the more time spent with it the better.