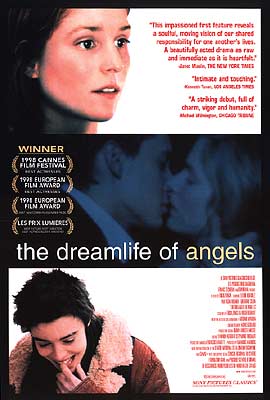 … The Dreamlife of Angels (La Vie Revee des Anges) is the debut feature film for writer/director Erick Zonca and it is a debut for which all film lovers can be grateful.

We meet Isa, a twenty year old wanderer, as she arrives in Lille, heavy rucksack on her back, looking to stay with a local friend who turns out to have wandered elsewhere himself. Isa works when she can and barely ekes out a subsistence, selling mounted magazine photos on the streets when she doesn’t have an alternative. (She is not beyond misrepresenting her sales as being for charitable purposes.) She lands a job in a dress factory where she meets Marie and she moves into Marie’s apartment. The apartment belongs to a woman and her daughter both of whom have been seriously injured in an auto accident.

Isa is patient, creative, centered. When we meet her, she is utterly unconnected to family or friends. Her story is about how she reaches out, seeking to connect, and the series of disappointments that come her way. Marie is angry and rebellious, putting up walls of resistance, even as she seems starving for a connection of her own. Marie is coldly, pessimistically realistic; Isa is warm, optimistic, romantic.

After finding her diary in the apartment, Isa starts making visits to the young victim of the accident in the hospital, another reaching out from her caring heart, an unrealistic attempt to connect. When Isa and Marie meet a couple of bikers, Isa refuses the advances of the young man who is interested in her. However badly her choices go, she is still choosing, exercising selectivity.

Marie, on the other hand, quickly falls in with the other biker. (I loved his line: "I don’t think of myself as fat. It is just a matter of vocabulary.") Sex, for her, is a way to connect, but she has no feeling for this guy. She meets a handsome, wealthy young man, and another affair ensues. This time she cares, but we see from the start that this young Lothario is beyond her reach.

As these events unfold, Zonca explores the unlikely pairing of Isa and Marie, rooted in shared loneliness, shared need. It is a relationship doomed by Marie’s demons and Isa learns through painful experience that all her goodwill, good sense, and openness will not necessarily enable her to establish the connection she seeks.

Zonca is quoted, "I have absolutely no interest in formulating truths about the world or society. What matters to me is encounters with human beings." This may be a tad ingenuous, for, if perceptively rendered, do not such encounters, and the choices the writer/director makes in so rendering, lead us to broader truths? Zonca also says that he never starts with a theme, but lets himself follow his imagination. Lots of not-so-good filmmakers do that, but Zonca, as he promises, introduces cogency and coherency to the materials of his imagination and, indeed, has come up with a craftily structured film, from Isa’s first missed connection with the friend gone to Belgium to her closing scene, at a new job in a factory – making electronic connections.

The broad sweep of the film is fleshed out, given depth and feeling and resonance by the superb performances of elodie Bouchez and Natacha Regnier, performances which already have begun to garner awards and recognition. Zonca draws from these two actresses a wide range of emotions, not only broadly expressed rage and profound sadness, but also the more subtle responses to the complications of their day to day experience. His script is rich in the small events that give texture to their lives. Together they create film portraiture of rare intelligence and subtlety and it is completely convincing.