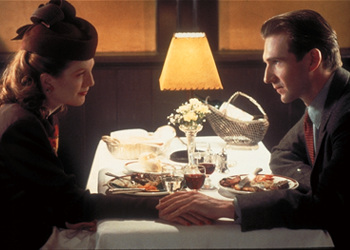 Christmas is the time of year for high-profile movies about glossy, doomed relationships, and this year’s entry is Neil Jordan’s The End of the Affair. But Jordan, being the iconoclast that he is, provides a little more bite than things like Out of Africa or The English Patient. The sex is a little hotter and the dynamics of the central relationship are less predictable – they’re rooted in Catholic mysticism of all things.

Based on Graham Greene&#146;s most autobiographical novel, Affair focuses on three people &#150; the bleached-out civil servant Henry Miles (Stephen Rea), his sexually restless wife Sarah (Julianne Moore), and their neighbor, novelist Maurice Bendrix (Ralph Fiennes). A chance meeting between Henry and Bendrix on a rainy London night in 1946 causes Bendrix to replay in his mind the obsessive love affair he and Sarah shared during the war until she abruptly ended it two years earlier. The meeting with Henry also leads to a chance encounter with Sarah, which in turn causes the lovers to pick up where they left off. The story moves back and forth between the two affairs &#150; the one in which the lovers knock themselves senseless with sexual indulgence as German V-1 rockets rain down on London, the other a more considered relationship in which they try to sort out the consequences of their previous fling.

Both husband and lover share a common mistrust of Sarah. Henry and Sarah have an affectionate but sexless relationship. (When Henry comes home unexpectedly during a bout of extramarital lovemaking and Bendrix worries that he has heard his wife&#146;s orgasm, Sarah is reassuring: "He wouldn&#146;t recognize the sound.") Sarah has a monopoly on all of the poise and sexuality that&#146;s on tap in her marriage; it&#146;s only left to Henry to wait for, and dread, the day when she&#146;ll finally leave him. But Bendrix is only a little more at ease than Henry. He, too, is constantly jealous of Sarah, forever certain that she&#146;s cheating on him. The two lovers are at loggerheads for much of the movie, and their continuous misreading of each other&#146;s intentions give rise to the final chain of events.

It wouldn&#146;t be fair to give away too much of what happens, but the story&#146;s central twist arises from a parallax view of the couple&#146;s initial breakup. When we first see the event through Bendrix&#146;s eyes, it seems an arbitrary, even sadistic, action on Sarah&#146;s part. But Bendrix eventually discovers that her feelings for him were deeper than he had assumed &#150; that it was precisely her feeling for him that caused her to end the affair. When they resume the relationship, it&#146;s with a newfound faith in each other and the intention of building a real life together. But there are to be two ends to the affair, one emanating directly from the other one.

The plot has some intriguing curlicues. When Bendrix and Sarah take up for the second time, he&#146;s convinced that she&#146;s having yet another affair, so he hires a private detective to follow her. The detective (Ian Hart) is accompanied on his cases by his son (Samuel Bould), a cow-licked urchin who even serves as housebreaker to further his dad&#146;s career. These two begin as comic figures &#150; the detective can&#146;t speak of his professional activities except in fatuous euphemisms, and the son is forever botching their surveillance jobs &#150; but by the end they too have become part of Sarah&#146;s crisis. And a neighborhood priest (Jason Isaacs, in a truly unsettling performance) has a couple of wonderful scenes, standing in for the God whom Sarah has betrayed and Bendrix has rejected, displaying sympathy for the one and a quiet savagery towards the other.

Regardless of how one relates to the specific Catholic underpinnings of Sarah&#146;s dilemma, it&#146;s hard to avoid the story&#146;s central issue: What if there were a real price to pay for breaking the promises we make in love affairs? We make them so impulsively, often meaning them with all our hearts in the moment, while we also deliberately deafen ourselves to the voice that tells us we aren&#146;t likely to always feel this way. The End of the Affair is about that point where desire so overcomes rationality that we&#146;re willing to do or say anything to maintain the object of our desire. For Greene, a converted Catholic, having to face a retributory God was perhaps the worst imaginable thing. But the majority of us are simply confounded and embittered whenever we&#146;re held accountable for breaking our careless little pledges &#150; we so little expect to get caught.

Unfortunately, Jordan’s characters occasionally express themselves in what is transparently written dialogue, a florid rhetoric that makes the actors appear foolishly earnest. Underscored by Michael Nyman’s string arrangements, these instances make up the most jarring note in the movie. Perhaps Jordan intended to play with the conventions of ’40s era romantic melodramas such as Brief Encounter, but the imposed artificiality takes the edge off the characters’ obsessions – and edge is what obsession is all about.

The End of the Affair is a treasure trove of fine acting. Stephen Rea appears to have inhabited a new body since he made The Crying Game for Jordan. Gone is the bohemian handsomeness, replaced here by a recessive ghost of a man whose double-breasted suits and squared-off homburg serve him as emotional armor, and whose pinched mouth and watery eyes make him appear on the perpetual brink of tears. Fiennes seems less self-conscious than at any time since Schindler&#146;s List. He can still be mulishly inexpressive (for entire scenes, the man simply doesn&#146;t move any part of his body other his eyes), but he looks at ease playing this Leslie Howard intellectual who has a sadistic bent to him.

But Julianne Moore outshines them all. Moore is one of the purest actors in movies today; her economy and emotional directness make the technical proficiency of a Meryl Streep or Kristin Scott Thomas look facile and synthetic by comparison. She disappears so far inside of Sarah that you don’t even notice the period costumes or jewelry she’s arrayed in – she wears them like belongings, not like props. Moore makes Sarah seem like a real person around whom a talented band of actors have gathered. She’s given birth to a new human being.

(15874)
$3.88 (as of January 23, 2021 - More infoProduct prices and availability are accurate as of the date/time indicated and are subject to change. Any price and availability information displayed on [relevant Amazon Site(s), as applicable] at the time of purchase will apply to the purchase of this product.)
related posts