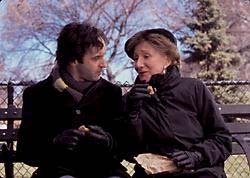 The Event lists three writers for the screenplay, often a sign of problems. It’s a movie with its heart in the right place and its politics rigorously correct, but its script is a bit of a mess and the overall product is very uneven.

The subject matter is the choice of the terminally ill to die, here Matt Shapiro (Don McKellar), a gay man who has been suffering from AIDS for seven years. That many people with AIDS have chosen to terminate their lives with dignity, often with the active or tacit cooperation of their doctors, is well known in the gay community. But the law prohibits both the act and assisting others to take their lives. In the U.S., only the state of Oregon has a law permitting doctor-assisted suicide and right-wing U.S. Attorney General John Ashcroft is exerting the full power of the federal government to overturn the Oregon law, as twice approved in elections by the people of that state.

There’s undoubtedly a way to make the case for assisted suicide in dramatic and filmic terms, but director Thom Fitzgerald (Beefcake, The Hanging Garden) and his co-writers haven’t found it. They have chosen to structure the plot as an investigation by an assistant D.A., Nicole Devivo (Parker Posey), into Matt’s demise. She interviews family members and friends who attended "The Event," a farewell party at Matt’s loft on the night of his death, planned by his friend Brian (Brent Carver). The investigation doesn’t have the ring of truth to it at all and the forced plot setup is dragged down still further by Parker Posey’s flat and unconvincing performance.

Still, the film might have come together if there were any depth at all to the characterizations. But, as in many classic World War II flicks in which the squad was made up of the obligatory Black, Jewish, and Italian or Irish representation, here the writers have been careful to include a Black, a drag queen, a Lesbian or two. Each has a place, larger or smaller, in the plot, but none is realized as other than a plot mechanism and part of the schematic setup. Even the scenic shots of New York used to bridge scenes and time are lacking freshness and seem stock. Adding in takes of the downtown skyline both before and after 9/11 is gratuitous, completely unrelated to the story and theme, adding to the lack of focus in the film, which skitters from soapy melodrama to farce (Mona, the teary therapist) and back. (And having the drag queen and a group of friends beat up an undercover cop does not have the kind of resonance that presumably was intended–the Stonewall liberated queens fighting back. On the contrary, it’s more like a frustrated reject being a bully, the way it plays out here.)

Matt, the hero, of course, is a regular guy, sweet and loved by all. Aside from his health miseries and the fact that he plays the cello, little else is learned about him as a person. His mother is played by Olympia Dukakis who graces every screen and stage on which she appears. Given a simplistic role as the Good Mother Who Loves Unconditionally, Dukakis (Moonstruck, Further Tales of the City) somehow invests the cliched role with warmth and humanity. Matt’s sister (Sarah Polley) is used to demonstrate Outline Point II(b) — the response of anger at the afflicted when a loved one reveals he has a terminal illness. Even an uncle is written in to demonstrate AIDS-phobia and homophobia within the family.

In short, one can picture the committee of writers sitting down together and coming up with a list of the points to be made about the subject and then filling in the outline, like painting by the numbers. Had they made their priority writing a drama about real, three-dimensional, non-stereotyped people, they would have done a real service in winning hearts to the idea that an individual should have the legal right to check out of an intolerable life. As it is, The Event will most likely be preaching to a very small group of the already converted.