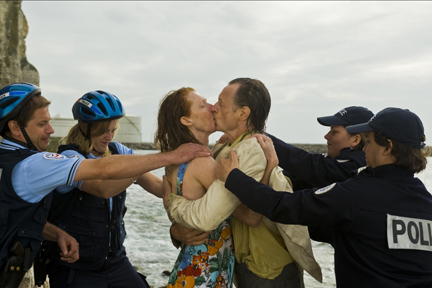 Fiona Gordon and Dominique Abel in “The Fairy”

Dominique Abel and Fiona Gordon are remarkably talented clowns who were a couple on stage before they were a couple in reality. As they have the same sense of humor and pathos, they work together seamlessly, enabling the absurd to appear normal. With Bruno Romy, their perfect timing, improvisational talents and exuberant screenplay turn an absurd comedy into a thoroughly enjoyable absurdist comedy.

“The Fairy” is the tale of Dom, a lonely night clerk at a cheap hotel in Le Havre, until one day, Fiona, an imperfect fairy, steps into his life and offers him three wishes. Since his bicycle has broken, Dom asks and receives for his first two wishes a scooter and gas for life (or as it turns out, for a while). He can’t make up his mind about what his third wish should be.

Dom and Fiona spend an enchanted evening together but Fiona disappears, having been imprisoned in a psychiatric facility. With the help of an inmate, she is rescued by Dom, her knight on a shining blue Vespa.

Fiona and Dom fall in love, have a baby, escape a police chase, and put the baby on the back of a car that goes into motion before they realize their mistake. They also dive off a cliff and serve time in prison. Yet, despite their travails, Dom continues to be unable to think of a third wish. Or perhaps he knows that Fiona, a fairy with limited and imperfect capabilities, couldn’t fulfill his last wish.

During all of this chaos, the couple becomes involved with a half-blind bartender, an English tourist who loses his precious dog, a lonely night watchman and a group of illegal immigrants.
Dominique Abel and Fiona Gordon have made three films together, “Iceberg,” (2005), “Rumba” (2008) and now “The Fairy,” all based on the relationship between the same couple, Dom and Fiona. Interestingly, in “The Fairy,” they meet, in “Iceberg,” they break up and come back together, and in “Rumba,” they share happiness nearly shattered by calamity.

While discussing “The Fairy” in an interview, Fiona Gordon said, “It’s a fairytale about the happiness that can be squeezed out of life simply by willing and desiring it. Of course no quest for happiness would be complete without obstacles and accidents…”

She also said in that same interview that, “My character is an unfinished prototype of a fairy, her powers are limited. Her ineptness makes her funny and moving, she is essentially a clown. In real life we are all handicapped, some more than others. We are all unfinished prototypes of human beings.”

Although “The Fairy” has been compared to 2011’s Academy Award winner “The Actor,” “The Fairy” doesn’t hark back to an earlier time. Dominique Abel said in an interview, “I don’t find our films nostalgic. We are not fixed on a particular period. It’s a mix. We are free to choose…”

“The Fairy” uses many comedic devises to achieve its entertaining results. Its visual comedy combines improvised sight gags with props, including the bartender’s thick glasses and Dom’s fake belly. When shooting moving scenes, such as running, the actors run on a cart, with the camera at a fixed distance. Mostly, “The Fairy” succeeds through its characters, who though based in a lonely reality, struggle to escape into a happier world of their own making.