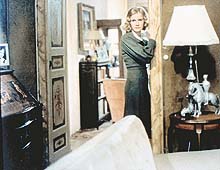 The Italians and the Holocaust: Persecution,

Pirandello, Fellini, Scola, and the Directors

Vittorio de Sica’s essay on the fate of Jews under fascism, The Garden of the Finzi-Continis is deceptively beautiful to look at, deceptively bittersweet in tone. Not accidental deceptions these, but deliberate, calculated constructions by de Sica to put into ironic perspective the history of the time as the story evolves to its inevitable conclusion.

Two families. The aristocratic and wealthy Finzi-Continis, living behind high walls in a luxurious chateau, retain at least some of their Jewish identity as seen in their observation of Passover. As with many Jews in the diaspora, the family identifies as Italian, as well as Jewish. The same is true of the second, upper middle class family whose elder son has been the friend of the Finzi-Contini daughter, Micol, since childhood and now suffers from his unrequited love for her. Micol, played by Dominique Sanda, is aloof, even teasing; she seems an ice princess.

From the start, de Sica provides evidence of encroachments by the anti-Semitic fascist regime of Mussolini on this group of privileged Jews, who remain in varying degrees of denial as their freedoms are pared away one by one, until, finally, they are confronted with the ugliest of realities. If the wealth of the Finzi-Continis seems to give them greater protection at first, it becomes clear in the end that those who are different will find no garden in which to hide for long.

The idyllic settings, lush music, and hot house atmosphere of the film become a stark contrast to the fate of the beautiful and privileged inhabitants within.

Hailed when first released, and the winner of an academy award, this film seems to some extent to have fallen from current critical favor. While it may not have the tightness, conviction, and sheer power of de Sica’s Bicycle Thief, it remains a highly effective piece of work by an always interesting and thoughtful filmmaker.