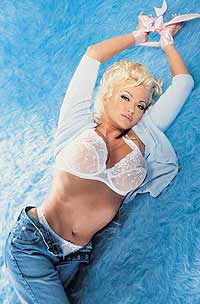 The world of adult films has its peculiar challenges and parameters &#150; live Internet sex shows, double penetrations ("DPs"), and AIDS tests every 30 days. It’s often far from glamorous &#150; performers are shown naked and freezing during a 3am shoot in 38-degree weather, coughing and gagging from an allergic reaction to special-effects smoke while a bored and slackjawed film crew stands idly by. And sometimes, as with any project, the "equipment" fails to perform.

Fugate shows only the nudity required to tell the story, and all sex scenes are cropped relatively discreetly. For the story here is not the nudity, but the boredom, job dissatisfaction, jealousies and rivalries. If not for the freakish physical attributes of most of the workers and the fact they perform naked, most of what’s seen here could be also part of the scramble for the top in any company’s middle management ranks.

Unlike Michael Moore, who imposes himself into virtually every scene of his alleged "documentaries," Fugate’s technique is to be as unobtrusive as possible. She exercises very few stylistic tricks and only rarely intrudes on the filming, and then only with a few off-camera questions. As with the best film storytellers, she’s proficient at showing and not telling, and gets her subjects to do a great job of revealing their true selves without any coaching or outside help.

Stacy is shown preparing for a Las Vegas adult films awards ceremony by picking out a dress, she says she wants to look "sexy but classy". But what she chooses looks more like it came out of Dolly Parton’s Goodwill reject bag. At the 1998 "Hot D’Or" Awards in Cannes, Stacy meets with an ardent and wealthy French fan, then later reveals that he’d paid her to have sex with him. "We need the money," she shrugs, jubilantly tossing the franc notes into the air. Throughout the film, Stacy has a sporadic relationship with Julian, a fellow adult-film performer who has a hard time keeping her public and private personas separate. But eventually they part, and Stacy has to find comfort elsewhere – "If I’m horny, I go to work. If I want affection, I’ve got my cat." Stacy’s mother and stepfather resignedly dismiss her work with a simple, "It’s a movie, and people have sex all the time. Some of the weirder stuff – well, when you see someone getting killed in a movie, they’re not really being killed either." But the disappointment in their eyes belies the words they’re speaking.

Fugate effectively contrasts Stacy’s constant wishes that she be known for who she really is with scenes of the physical retooling that she endures to continually upgrade her appearance. Breast implant replacements (going from an E-cup to a "more natural" D-cup), liposuction, and lips being injected with fat from her own body are all shown in graphic detail, each procedure more obscene than anything she endures on the job. She visits a hypnotherapist in hopes that he’ll be able to give her a positive self-image. Finally, she has a string of kanji tattooed behind her right ear &#150; Trust No One. By the end of the film, Stacy Baker is referring to Stacy Valentine as a separate personality.

Shot on both film and videotape, The Girl Next Door is a simple and straightforward work, one that views its subject through a clear and sharply focused lens. Fugate has described it simply as "a woman trying to find her place in the world." By its end it may not be readily apparent how Christine Fugate views Stacy Baker/Valentine, but viewers are given more than enough objective evidence to make their own assessment. It’s a film that unfolds like a replay of a train wreck seen in slow motion &#150; unpleasant but fascinating.