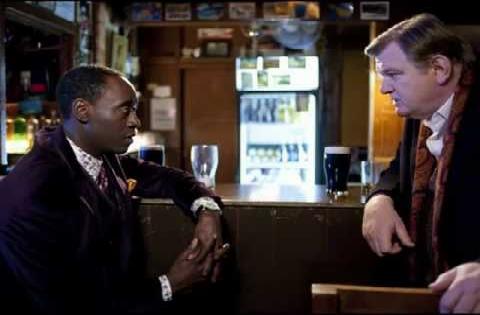 Ever since “In Bruges,” moviegoers have been getting used to another side of the Irish, the side that is casually racist, violent, and sentimentality-free. “I thought only black people and Mexicans smuggled drugs,” says Garda Boyle blithely to Don Cheadle’s stunned FBI agent, in western Galway to investigate a massive drug smuggling operation at a Galway city briefing.

It’s a film full of black humor and surreal surprises, like “In Bruges” and the earlier film “Intermission,” which half this cast appeared in as very different but equally bad boys.

Brendan Gleeson plays the small-town, rough-edged police chief in the bogs of Connemara who is investigating a random murder where the victim has bible pages in his mouth, a plant pot strategically placed on his crotch, and the legend “5 1/2” written in blood above his bullet hole.

But this is not useful information; it merely introduces us to Gleeson’s Boyle and a junior from Dublin, Sergeant McBride, who helpfully brings up Fellini’s “8 1/2” and David Fincher’s “Seven” while they figure out the bizarre evidence.

The landscape is the one where John Michael McDonagh spent his holidays as a lad – and where his brother Martin wrote his best-selling plays “The Beauty Queen of Leenane” and “The Cripple of Inishmaan.” Heather-topped and rocky headlands poke into Galway Way from the marshy bogs where guns and drugs are to be hidden. Spiddal Quay and piers are the bleak locations that help along an even bleaker crime scene.

As played by Gleeson, the sergeant is a cusser, a hard man, a former Olympic swimmer (says he) and an Irish home boy, whose softer side is well hidden until we meet his ailing mammy, gently dying in a rural hospice with a copy of “Oblomov” in her hands. A sweet touch, this ends badly after a pub session to the Lass of County Down. A small tyke on a bike takes him to a desolate bog where they find an arms cache, and luckily for Boyle there’s an AK47 and a Derringer over for him to snag after handing them over to the IRA.

Don Cheadle’s Wendell is from a small town too – Konasha in Wisconsin. But despite Gleeson’s blunt questioning (Did you have projects in Wisconsin?) turns out to have had a privileged background, complete with skiing in Aspen and Yale.

The smugglers are an evil trio who bandy Nietzsche quotes around and the lack of famous welsh philosophers, but include a spectacularly evil Englishman, the butt of more casual racism.

One explains why he’s a sociopath, not a psychopath. While Sergeant Boyle is away in Galway frolicking with two hookers dressed as women cops in tiny skirts, they shoot McBride in the back and Boyle arrives home to find his distraught Croatian wife. “Good footballers, well they used to be,” he remarks, after mistaking her for Romanian. The casual racism is pardoned.

When Wendell is sent to Cork after a misleading information leak, Sergeant Boyle has to shoot one of the evil trio, then suit up and face the bad guys on his own. He calls Wendell back, and the pair shoots down the druggy trio.

Unlike Boyle, Cheadle’s Wendell is a little bit under drawn, but he does what he can with it, as usual. Is there a better character actor in America today? We think not. He deserves a bit more. We should feel more connected to him and instead we wind up, like Cheadle himself, bonding with Gleeson.

(18187)
$2.85 (as of January 24, 2021 - More infoProduct prices and availability are accurate as of the date/time indicated and are subject to change. Any price and availability information displayed on [relevant Amazon Site(s), as applicable] at the time of purchase will apply to the purchase of this product.)

(19457)
$20.99 (as of January 24, 2021 - More infoProduct prices and availability are accurate as of the date/time indicated and are subject to change. Any price and availability information displayed on [relevant Amazon Site(s), as applicable] at the time of purchase will apply to the purchase of this product.)

(13050)
$4.18 (as of January 24, 2021 - More infoProduct prices and availability are accurate as of the date/time indicated and are subject to change. Any price and availability information displayed on [relevant Amazon Site(s), as applicable] at the time of purchase will apply to the purchase of this product.)
related posts