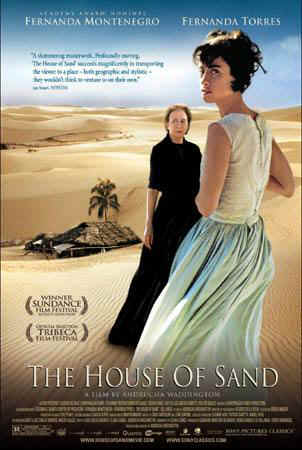 Brazilian director Andrucha Waddington&#146;s The House of Sand is both sparse and epic in scope. A mythic version of the twentieth century is portrayed through three generations of pioneer women&#146;s travails surviving in the eerie wastelands of the coastal desert of northern Brazil. The film opens with Vasco (Ruy Guerra) and his small band of homesteaders arriving at the lagoons of a vast white sand desert. He has bought his bride Aurea (Fernanda Torres in 1910-1919; Fernanda Montenegro in 1942-1969) and her mother Dona Maria (Fernanda Montenegro) out of debt and into familial servitude. This sets the mood for a key theme &#150; survival in the face of relentless despair. Even as Vasco dies and his little band deserts him, the pregnant Aurea and her mother build a house in the sand.

The establishing shots of The House of Sand consist of panning long shots, vertical and horizontal sweeps of undulating white sands. The overwhelming dominant is the infiniteness of white. Often the sky is white or lost in white clouds, white land and white sky merging, indistinguishable from one another. At times the sands look and sound like vast stretches of ocean waves. And yet they remain eerily sterile, and conjure associations with the cold, sharp ridged outlines of the surface of the moon. The only outsiders ever to visit this world are a crew of scientists, accompanied by military guides, who have come to photograph an eclipse of the moon. Even though the shifting sands eventually engulf her home and take her mother&#146;s life, Aurea will come to love living on the moon.

The original homesteaders are driven away by a band of escaped former slaves, who live a couple days&#146; journey away, along the shoreline, and who survive by fishing. Their leader Massu (Seu Jorge in 1910-1919; Luiz Melodia in 1942) will become one of the three men Aurea will know in her life, besides her insanely driven husband and the young military guide Luis (Enrique Diaz in 1919; Stenio Garcia in 1942), who did not take her away. Luis does return one day and takes Aurea&#146;s daughter Maria (Fernanda Torres in 1942; Fernanda Montenegro in 1969) back to civilization.

Casting Fernanda Montenegro in the role of a portion of all three women&#146;s lives drives home the point Waddington seems to be making about the cyclical nature and interconnectedness of human desire and human history. Aurea experiences major world history as momentary interruptions in her otherwise isolated life: World War I brought a solider who did not save her; World War II brought airplanes and soldiers to whom daughter Maria prostitutes herself. And news of man&#146;s landing on the moon comes as if from an alien planet.

The slow-moving plot, the oppressively vast and empty landscapes of The House of Sand hearken back to the moral landscapes of John Ford and seem to fill up with the deep passions of Greek heroines, Penelope, Medea, Antigone — but in exile on the moon. The young Luiz had tried to explain to Aurea Einstein&#146;s theory of relativity: if of two twins, one flew away in a space ship and the other remained on earth, the returning space traveler would prove to be younger than his earth-bound twin. When she learns of man landing on the moon, Aurea asks, "And when he returned, was the man younger?"