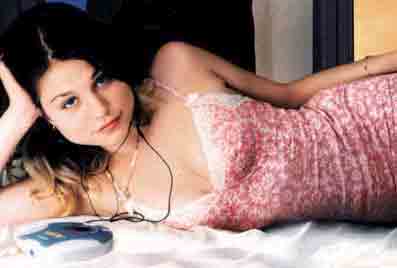 In The Housekeeper, Claude Berri has made the sort of film that only the mature filmmaker could make. It is full of canny observations about love and loss and aging which Berri delivers with wit, wisdom, and a bit of rue as well.

Six months after his wife of fifteen years left him for another man, Jacques (Jean-Pierre Bacri), a sound engineer, is still mired in anger, loneliness, and depression, all reflected visually behind the main titles in views of his chaotically messy St. Germain des Pres apartment. Dirty dishes engulf the kitchen, dirty clothes and old newspapers are strewn everywhere–something must be done.

Jacques interviews a housekeeper, Laura (Emilie Dequenne), whose ad he found on a bulletin board at a local cafe. She’s something of a fantasy come true–young, pretty, sexy, easy-going, a hard worker. She also has a mind of her own. While interviewing her, Jacques inappropriately asks, "What’s with your hair?," to which she replies, "I don’t clean with my hair!"

From half a day a week, Laura’s time working for Jacques increases as she does more for him–cooking, ironing. Then, she asks him if she can stay for a few days. Her relationship has broken up and her boyfriend has asked her to move out. Jacques resists, but then agrees. Once moved in, Laura, who’s falling for Jacques, comes on to him; his resistance is minimal and their intimacy grows.

Berri follows the step-by-step involvement of these two, observing along the way the implications of the difference in their ages and interests. He likes jazz and classical music; she plays rap and pop music at high decibel levels. She enjoys junky TV; he reads Dostoyevsky. How little they have in common is eloquently demonstrated in a dinner the two have at home with nary a word of conversation between them. When they go off for a beach vacation together, the difference is all the more noticeable–he covers up from the sun while she basks; she has boundless energy and races for the water while he holds back, saying it’s too cold.

Peripheral characters add interest and complexity to the mix. Claire (Brigitte Catillon), Jacques’ friend of many years, is bereft over her lost love and drinks too much. Constance (Catherine Breillat in a cameo), his wife, insists she still loves him and wants to come back. Ralph (Jacques Frantz), another old friend at whose home they stay at the beach, is a painter who lives with and paints only chickens–and then serves them for dinner.

Bacri (Same Old Song, Un Air de Famille), plays with a natural ease, catching all the subtle and not so subtle thoughts and feelings which Jacques experiences at this turning point in his emotional life as well as the hesitancy, the reserve which experience teaches. Dequenne (Brotherhood of the Wolf, Rosetta) is a charmer; her Laura has all the easy casualness of the young while making Jacques’ attraction to her seem eminently reasonable.

Without fuss, Berri establishes a pleasing sense of place both in Paris and at the beach in Brittany. He makes his points economically and amusingly through acutely observed behaviors, never belaboring the obvious. In a telling final scene, Jacques, who didn’t swim with Laura, is finally lured into the water by a divorcee his own age he meets on the beach. After some effortful swimming, he gets a cramp and has to be helped ashore. Life is full of risks, the incident suggests, and sometimes taking risk is rewarded by pain. And then you move on.