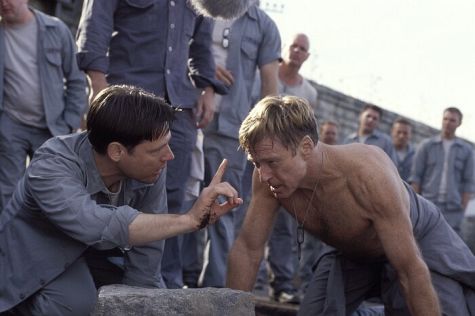 The "prison film" has long been a Hollywood staple. In such a picture one can reliably predict that the warden will be evil, the inmates rough but colorful, and that a reluctant leader &#150; usually a newcomer who doesn&#146;t quite fit in at first – will emerge to lead his ragtag fellow inmates to eventual triumph. The Last Castle takes this timeworn premise and steers it down a ludicrous and obvious path to a conclusion that will have most audience members rolling their eyes in disbelief rather than cheering.

The prison in question is The Castle, a maximum-security military facility where Colonel Winter (James Gandolfini) is the warden. He’s an anal-retentive desk jockey who spends his days listening to Salieri concerti, polishing his military curio case, and ordering odd psychological manipulations of his inmates. A high-profile new prisoner arrives in the person of renowned three-star General Irwin (Robert Redford). He’s been given a ten-year sentence after pleading guilty at his recent court-martial. The relationship between Winter and Irwin begins as uneasy respect but soon evolves into an adversarial one, as inmates gradually rally around Irwin in solidarity against Winter’s oppressive policies.

Director Rod Lurie (Deterrence, The Contender) and cinematographer Shelly Johnson largely seem content to recycle shots and scenes from The Shawshank Redemption. But the bigger problem here is David Scarpa and Graham Yost’s script. Cliches and prison film stereotypes abound &#150; guess which oh-so-predictable situation will arrive next and it almost certainly will.

The film is a slapdash mix of confrontations, none with much justification for their existence beyond cinematic effect. They bear little relationship to common sense or basic human nature.Winter’s feelings toward Irwin change in an instant &#150; one moment he’s muttering "They should be naming a base after this man, not locking him up" and hoping Irwin will sign a copy of his book on military strategy. The next he’s devising ways to undermine Irwin’s authority with the other inmates, all because of a one-time flip comment Irwin makes about soldiers who have never seen combat.Upon arriving, Irwin claims he just wants to quietly do his time and go home, but within days he’s planning a response against Winter, based on a few inmates’ complaints about mistreatment that Irwin hears during a mess hall bull session.

And the response that Irwin formulates against Winter is nothing short of ludicrous. Instead of using his considerable influence with high-level military brass to apply political pressure on Winter or to start an investigation of prison conditions, he instead begins building his own covert army within the prison walls, with the intent to take control of the prison by force. Their eventual goal is the epic and meaningful measure of… flying the prison flag upside down (the international distress signal), therefore showing that things inside its walls aren&#146;t all kosher. There’s another confrontation revolving around a wall that Winter is having the prisoners build, but it too seems plopped in the middle of the film just to provide yet another Big Scene.

As Winter, Gandolfini never manages to shed his Tony Soprano personage quite enough to fit the icy cruelty that’s required. Redford’s performance as Irwin is equally flawed. He’s supposed to be an inspiring natural leader uncomfortable with the limelight, but instead is a contradictory enigma, in many ways just as much of a megalomaniac or soulless Machiavellian as Winter.As a group, the inmates are quirky and personable, noble and brave, the film conveniently ignoring that since this is a maximum-security facility they’re probably guilty of crimes a bit more serious than jaywalking. Mark Ruffalo (You Can Count On Me) has a purportedly pivotal role as an inmate crucial to Irwin’s plans but spends most of the film looking as disinterested as the audience is likely to be.