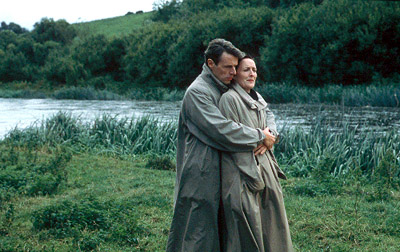 The Last September is a scenic look at a time and set of attitudes long past. While gorgeous to look at, it’s much more effective at capturing the appearance of an era than it is at involving us in the lives of the people who lived it. It’s presented as social commentary, but doesn’t offer much beyond picture postcard vistas and stock class warfare posturing. Like a 90-minute overture to a 10-minute opera, it’s long on anticipation and short on fulfillment.

County Cork Ireland in 1920 is awash in political and social transformation. British rule is ending, a new world of change and progress is intruding on old bastions of civility. The start of the Roaring 20s has spurred a sea tide of social change, especially regarding women and their role in relationships. Lois Farquar (Keeley Hawes, The Avengers) is a 19 year old woman living with her aunt and uncle (veterans Maggie Smith and Michael Gambon) at their luxurious country estate. Her aunt would like to keep her sequestered, both from the evolving world around her and from a growing set of suitors. "I’ve never met anyone so determined to be in love," she says. But Lois has other plans.

Further complicating her coming of age and its attendant perils of sexual awakening, Lois’ romance involves impending political strife. She’s being courted by Captain Colthurst, the commander of the local platoon of Black-and-Tans charged with rooting out Irish insurgents. He’s a totally improper suitor in her aunt’s eyes &#150; not enough money or social status. An old classmate of Lois’ is the leader of the local Irish forces, eventually leading to a conflict of affairs both political and romantic. A mansion full of summer visitors fill out the troupe – Lois’ older cousin, who’s equally frustrated: "I should like something to happen; I should like this house to burn. But when it does – we’ll all be so very careful not to notice." Friend of the family Marda Norton (Fiona Shaw) supplies advice to Lois, vinegar for everyone else.

In her first cinematic outing, theatre and opera director Deborah Warner brings a decidedly stagy and static feel to the film, presenting it as more a series of striking tableaux than as a fluid narrative. Scenes and camera shots are held several beats longer then necessary, and many shots are set up for affecting visuals that seem at odds to the emotional tone of the story. Actors make their entrances, hit their marks and exit with metronome-like precision, but never seem to imbue their characters with much personality or life. John Banville’s script, adapted from Elizabeth Bowen’s novel, is of little help &#150; it mostly substitutes speeches and soliloquies for dialog and provides little in the way of dramatic development. The climactic moment of the film is a virtual reprise of an incident seen earlier and as such is ineffective.

Keely Hawes’ performance is a bright spot in the film. Her portrayal of Lois is multifaceted and unassuming; the sense of wonder and discovery that she displays is genuine and infectious. But except for Fiona Shaw, who lends an air of wit and bemusement, the rest of the cast seems lifted from a Saturday Night Live sketch of Bad Period Costume Drama, particularly Maggie Smith &#150; who in this role resembles nothing so much as a parody of herself. As Colthurst, David Tennant is particularly wooden.

The Last September creates a lush world, rich with portent and possibility, but then offers little beyond scenery and stagecraft. While beautiful, it’s inert and uninvolving. The net result is like a wedding cake, an elegant creation of empty calories that loses its appeal after the first few sugary bites.