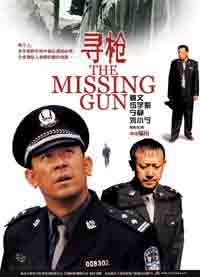 Fans of non-Hong Kong Chinese cinema who are impatient from the long take, long shot style of Tian Zhuangzhuang (The Blue Kite), Jia Zhang Ke (Platform), and Hou Hsiao-Hsien (Flowers of Shanghai) should prepare themselves for The Missing Gun. It stars Jiang Wen, whose biggest role may be that in Zhang Yimou&#146;s Red Sorghum, but he is also the director of the recent and much-acclaimed Devils on the Doorstep. The Missing Gun though is made by a brash, young newcomer, Lu Chuan, and for mainland Chinese movies, it&#146;s a radical departure. No glum affair like Beijing Bicycle or exotica like Raise the Red Lantern is this, but rather a pumping, in-your-face style-fest. While Lu claims Francis Ford Coppola as a hero, his film is far closer to Trainspotting. The credit sequence has the camera careening down the streets of the provincial village setting in fast-motion accompanied by a head-banging music beat (by Felling Band). Different scenes sport jump cuts, a whirling camera, surreal imagery, and a playful use of space.

The story is similar to Akira Kurosawa&#146;s Stray Dog. A cop, Ma Shan (Jiang), awakens after a night of drunken celebration to find his gun missing. His sister got married and he can&#146;t remember what happened, how he got home or who took him. In China, where guns are extremely rare and gun ownership is strictly forbidden, the loss of a gun means possible dismissal and definite humiliation. Tracing his path backwards, he encounters stuttering Liu (Wei Xiaoping), a bricklayer turned noodle-seller, fellow war veteran Old Tree Ghost (Pan Yong), and old police friend Chen Ying (Ji Pei). They point him toward possible suspects, shady businessman Zhou Xiaogang (Shi Liang), who runs an illegal liquor factory, and Ma Shan&#146;s old lover, Li Xiaomeng (Ning Jing, Red Firecracker, Green Firecracker), who has recently returned to town. The situation goes from bad to worse for Ma Shan when a murder victim turns up, shot with his gun.

A subplot involving Ma Shan&#146;s troubled relationship to his wife Han Xiaoyun (Wu Yujuan) and son Ma Dong (Wang Xiaofan) provide the film with some needed poignancy. Han suspects Ma Shan of cheating on her with Li and accuses him of not being a father to Ma Dong. Yet the boy shows continued devotion to his father, saying he will find daddy&#146;s gun in exchange for the promise of no more beatings.

Lu Chuan&#146;s bravura style is assured for a first feature, if a bit too showy, but it is invigorating in the context of contemporary Chinese cinema. Lu milks much humor from Western influences &#150; a ridiculous-sounding telephone ring, an Italian suit &#150; and through the deadpan acting of Huang Fan and Li Haibin, who play Ma Shan&#146;s sister and her new husband, respectively. For all the stylization, the heart of the film rests on the shoulders of Jiang Wen, who proves more than worthy of the task. His slow-burning intensity with moments of explosive emotion supplies an intriguing interior monologue with the character&#146;s essential decency. If Jiang keeps this up, he&#146;ll soon be as large a figure as Zhang Yimou on the Chinese cinematic landscape.