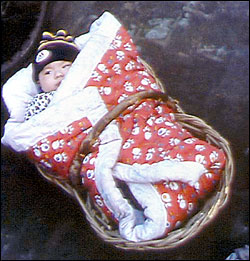 The New Directors/New Films series is one of the most anticipated film events on the calendar in New York City, and it has premiered numerous movies to American audiences which have gone on to much acclaim &#150; Maborosi, Shall We Dance, Buffalo &#146;66, Run Lola Run, and Jesus&#146; Son among others. Occasionally though, how a particular movie makes the series is a mystery. The excruciating Orphan of Anyang presents just such an enigma.

The story involves three main characters. Forty-year old Dagang (Sun Gui Lin) has lost his factory job. While eating at a street stand, he encounters and takes in an abandoned baby accompanied by a note indicating that whoever cares for the child will get a stipend of 200 yuan a month. The money comes from the mother, Yanli (Zhu Jie), a prostitute who lives in an environment unsuitable for raising a child. She shares a single garbage-strewn room with three other women. Her pimp, the baby&#146;s father, Si-De (Yue Sen Yi), discovers he has terminal cancer. Taking a sudden interest in his only legacy, his neglected son, he and his gang go off to make trouble for Dagang.

The Orphan of Anyang is the first feature film of 37-year old Wang Chao, a former assistant to Chen Kaige, a once-promising mainland Chinese filmmaker who abandoned imaginative little films like Yellow Earth for overwrought epics like Farewell My Concubine and The Emperor and the Assassin. Wang&#146;s own style, however, is indebted far more to the Taiwanese than to Chen. In fact, Wang has probably watched too much Hou Hsiao-Hsien, particularly Goodbye South, Goodbye, in preparing for his own film. Only Wang has neither Hou&#146;s eye for composition nor Mark Lee Ping-Bin, perhaps the greatest cinematographer working, to light the movie for him. What Wang ends up with is a feeble carbon copy.

Like Hou&#146;s usual style, Wang utilizes excessively long takes with a mostly still camera. Sometimes Wang&#146;s shots linger long after the character has left the frame. This emphasizes the environment to the viewer except that any two seconds of The Orphan of Anyang already screams impoverished rustic China so there&#146;s no need to wallow in it. Furthermore, Wang&#146;s shots look very flat and uninteresting with the characters either in profile or simply facing the camera.Then Wang seems compelled to hold his shots for an eternity. In one instance, two characters simply scarf down a bowl of noodles in silence. That demonstrates the awkwardness between them, but a more efficient way of doing that than boring the audience with two long minutes of quiet mouth-stuffing is to have 20-seconds of awkward dialogue.

Worse still, The Orphan of Anyang is virtually devoid of humor except for the unintentional sort derived from bad acting. The cast is non-professional and it shows. Yue Sen Yi gives the worst instance of fainting since Julia Adams saw the Creature from the Black Lagoon. The baby, who is helped by not having to act, out-performs the blank-faced thespians. When Yue&#146;s character loses his hair from leukemia and chemotherapy, his head just appears to have been poorly shaved leaving plenty of stubble, which is not how chemo patients look.

Wang seems to have little feel for the material. Dagang finds some work doing bicycle repairs, but Sun Gui Lin doesn&#146;t look like he has any idea of what he&#146;s doing. Given the style of what has come before, a poorly edited, ineptly-shot montage of Dagang and Yanli running around town with the baby feels completely out of place. When the climactic action arrives, it takes place off-screen and it has to because Wang does not have the aptitude to deliver it otherwise. He can&#146;t present anything more dynamic than walking.

For most movies, 84 minutes is short, but this one feels like a life sentence. Of course, if Wang cut it at a conventional pace, it would look like a trailer, which is about all the substance this movie contains. It is recommended only if one needs to catch up on sleep.