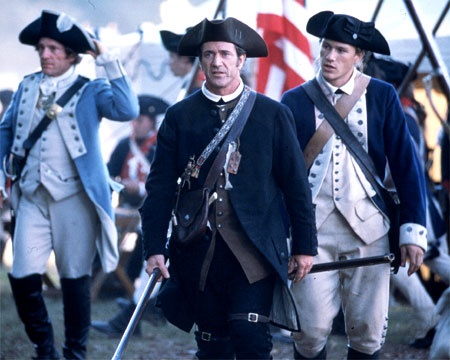 Director Roland Emmerich and producer Dean Devlin first treated us to their overblown brand of Fourth of July fireworks withIndependence Day in 1996. In that little-seen arthouse curiosity, Americans found a new reason for celebrating their national holiday through the kicking of major alien butt. Now Emmerich and Devlin jump back a couple of hundred years to teach us the true meaning of Independence Day. Which is, of course, the kicking of major British butt.

The Revolutionary War has proved an elusive subject for filmmakers. The last major attempt at bringing it to the screen – 1985’s Revolution, starring Al Pacino – was a notable disaster, both critically and at the box office. Theoretically, there should be dozens of worthy stories from the era suitable for big-screen treatment. You won’t find any of them here, though. Like Gladiator, The Patriot is another tale of one man seeking vengeance against those who killed his family, dressed up in historical epic drag. Call it Mad Max 1776.

Mel Gibson is Benjamin Martin, a man with a warlike past who has settled down to raise a family on his South Carolina farm. When colonial resentment begins to boil over, Martin speaks out against taxation without representation, but stops short of endorsing revolution – he refuses to fight. His eighteen-year-old son Gabriel feels differently and signs on with the Continental Army. Two years later, Gabriel arrives back at the homestead wounded, along with a good many other soldiers, rebel and redcoat alike. Martin tends to them all, thus meeting with the intense displeasure of arriving Col. William Tavington (Jason Isaacs). Tavington sentences Gabriel to death, but when Gabriel’s younger brother interferes, it is he who ends up dead at the Colonel’s hand. Ordering Martin’s house burned to the ground and all the colonial wounded killed, Tavington and his troops take off with Gabriel in tow.

Thus begins Gibson’s transformation into Mad Mel, or as he is known to the British troops, "The Ghost." Arming his two youngest boys with rifles and himself with as many guns, knives and hatchets as he can carry, Martin sets out to liberate Gabriel from the Brits who have seized him. The ensuing slaughter of redcoats at Martin’s hands is a shockingly savage one for a summer popcorn flick; for a moment you think the movie might actually be interested in exploring some areas of moral ambiguity. The moment passes.

This brings us barely one-third of the way into this two-and-a-half hour endurance test, with most of the interesting scenes now behind us. The long stretches between carnage that await – Emmerich and screenwriter Robert Rodat find time for a little of everything, from corny slapstick to some teen romance for the Dawson’s Creek set – afford the audience plenty of time to contemplate all the aspects of the American Revolution that the filmmakers don’t appear to be particularly interested in exploring. Their concerns lie primarily in buffing the image of their hero, a composite character comprised of the noblest aspects of several historical figures, with none of their pesky flaws and foibles. The filmmakers’ insistence on imposing a modern sensibility onto historical material gives us as a main character a wealthy southern landowner who has no slaves. The black servants who work for him are paid well for their efforts and treated as members of the family. A slave who fights as a member of Martin’s militia with the promise of future freedom is the butt of some good-natured ribbing from his fellow soldiers at first, then the object of proud admiration once he proves himself as a warrior. These touching little lessons in tolerance might be all right in the G-rated Disney version of this story, but they’re anachronistic to the point of distraction in The Patriot.

"Some things are worth fighting for," the posters for The Patriot proclaim, but just what does this movie think those things are? Whether you feel the war was fought for the cause of justice and liberty or simply because a bunch of rich white guys didn’t want to pay their taxes, it’s an issue The Patriot couldn’t be bothered with. This is a revenge action thriller to the core, and the personal stakes between Martin and Tavington continue to rise to the point of absurdity. Their climactic showdown takes place amid one of the pivotal battles of the war, with Cornwallis finally forced into retreat, yet this world-changing event serves as mere window-dressing – an excuse for some flag-waving rah-rah to jack up the stakes and make the movie seem like it was about something. You’ve seen this crass brand of ‘patriotism’ before – in Rocky movies, in Rambo, and in Independence Day. This time around, the fireworks amount to little more than a fizzle.

(19551)
$20.99 (as of January 25, 2021 - More infoProduct prices and availability are accurate as of the date/time indicated and are subject to change. Any price and availability information displayed on [relevant Amazon Site(s), as applicable] at the time of purchase will apply to the purchase of this product.)

(16313)
$11.50 (as of January 25, 2021 - More infoProduct prices and availability are accurate as of the date/time indicated and are subject to change. Any price and availability information displayed on [relevant Amazon Site(s), as applicable] at the time of purchase will apply to the purchase of this product.)
related posts