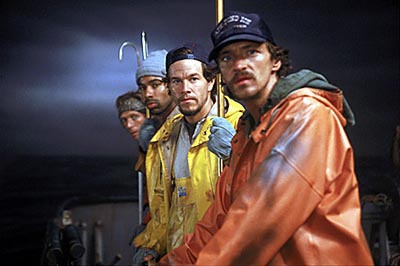 In October 1991, Hurricane Grace collided with a Canadian low pressure center and a cold front off the New England coast. This freakish combination of forces produced what meteorologists called "The Perfect Storm" &#150; a Force 12 monster packing 100 foot waves and greater than 120 miles per hour winds, the worst conditions recorded in more than a hundred years. Sebastian Junger’s book, "The Perfect Storm," is a stirring but somewhat rambling account of the storm’s effect on the entire Eastern seaboard. The film version is like Twister on the high seas &#150; much more notable for the intricate and furious special effects it displays than the story it tells.

The main plotline concerns the crew of the Andrea Gail, a swordfishing boat out of Gloucester, Massachusetts. Captain Billy Tyne (George Clooney) has decided to set out in late October for one last run. His previous few trips have been less than successful, especially when compared to the hauls brought in by sister ship Hannah Boden, helmed by Linda Greenlaw (Mary Elizabeth Mastrantonio). After catching their limit, the crew heads for port, only to be engulfed by the killer storm and sink.

Director Wolfgang Peterson (Das Boot, Air Force One) and screenwriter Bill Wittliff have combined the multiple stories from Junger’s book into a vague and unfocused film. Peterson takes his time getting the story started – it’s almost 40 minutes before the Andrea Gail finally sets sail. We’re shown lots of anguish from family members (Rusty Schwimmer and Janet Wright) concerned about risk, angst from the crew as they decide whether or not to go. Tyne’s crew also includes Bobby Shatford (Mark Wahlberg), a young guy with both a divorce lawyer and a girlfriend (Diane Lane) to support. John C. Reilly and William Fichtner are also on board. Then Peterson makes like a Tom Clancy novel, hopscotching to various sites around the Atlantic as the storm builds. In the book, this was used to good effect to introduce other characters and plotlines that converged later. But here Peterson never spends enough time at any of the other locations to make them very meaningful, so the net effect is to take the focus off of the Andrea Gail and make one wonder – whose story is this, anyway?

In writing the book, Junger was hindered by a scarcity of facts. Other than a few radio transmissions from the Andrea Gail and data from area weather buoys, little is known about what actually happened to her. He constructed a probable scenario by using a composite of events that had happened to swordfishing crews on other voyages. In the film version, Peterson and Witliff go one step further, and spackle their story with stock movie plot devices like a totally unmotivated feud between two crew members and an unrequited romance between Tyne and Greenlaw. And they modify one crucial plot element that transforms the Andrea Gail’s demise from an unfortunate act of divine providence to the logical consequence of an egotistical and reckless action. As a result, less sympathy is generated for the Andrea Gail’s crew when the ship finally founders. . In Titanic, it was also known beforehand that the ship sinks – but that was tragic because the 2,200 people on board had bought a ticket on what they thought was an unsinkable ship. Here, it’s just six guys with more bluster than reason, paying the price.

The characters lack definition and the performances lack modulation and variation. During the storm sequences most dialog is screamed at the top of the actors’ lungs, which makes for a notable lack of dramatic contrast. The characters back on shore are asked to do little more than wring their hands while watching TV. On board, John C. Reilly reprises the same aw-shucks Everyman performance seen several times from him already, and the rest of the crew isn’t asked to do much beyond their "Tough Guy #1", "Womanizer #2" labels. As Tyner, Clooney is calm and quiet, but a blank slate more than an enigma. We never get much sense of why he’s here or what drives him. And Mary Elizabeth Mastrantonio is wasted in a role that requires her to do little more than to scream "Billy, be careful!" over the radio. By film’s end, we don&#146;t know enough to care about these people, so when a concluding memorial service is shown there isn’t a damp eye in the house.

The special effects are impressive as we see the Andrea Gail pummeled by increasingly larger waves. Also notable is the physical strength and stamina demonstrated by the cast &#150; they spend most of the last hour of the film either underwater or being deluged. Clooney reportedly did most of his own stunts, including one punishing scene where he clings to a wildly gyrating boom while carrying a blowtorch. But the digital effects outshine the actors here. The Perfect Storm is far from perfect &#150; it consists of much sound and fury, eventually signifying very little.