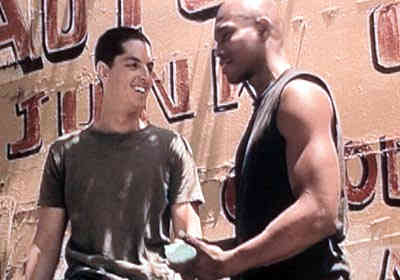 Josh Evans’ The Price of Air is the sort of independent film that makes you crave Hollywood: it wears its very ineptitude as a badge of honor. It assumes that we’ll be thrilled by its "transgressions," as though meandering improvisation, vicious misogyny and dingy, out of focus video are any less boring than mainstream pabulum.

The film begins at the end, with T.V. reporters swarming into a crime scene. These scenes have some bite; the editing is fragmented and abrasive, the scenes cutting off just as we’re registering their impact. But when the sequence ends, the movie stalls into its real rhythm, a plodding, formless lurch. Much of its first third consists of improvised conversations between Paul and his friend D, played by rapper Sticky Fingaz. These scenes are excruciating, like two C- students in Drama 101 running lines from Mean Streets. We learn exactly two things about the characters in these endless exchanges: they loathe women ("Pussy is corruption," D tells Paul) and they say "fuck" as often as possible.

It’s hard to tell how we’re supposed to take Paul in these scenes. If the film exhibited a sense of humor, the fact that he comes off as a little rich boy playing thug might be ironic. But since Evans the writer has provided Evans the actor only the sketchiest outline of a character, Evans the director is left with nothing to work with but swaggering and mumbling. Paul remains completely opaque: since we have no idea what motivates any of his actions, we’re never moved to care what happens to him.

One would think that a film that casts an archetypal television dad as a corrupt Mr. Big who casually tosses off racist epithets would at least be funny. Whatever charge there is in seeing Van Patten dressed in leathers at an S & M club gets lost as we have to live with his unironic attempts to play a heavy. Evans surely intended us to laugh and wink at the performance, but he doesn’t seem to have let Van Patten in on the gag. That could be a fruitful strategy (Russ Meyer purportedly managed the brilliantly campy performances in Beyond the Valley of Dollsby telling his cast that they were making a serious film), but Van Patten doesn’t have the spark to carry off this sort of theatricality. He mainly just seems confused and embarrassed.

Michelle Phillips has it even worse. She’s in the film mainly to inspire gynophobic dread by throwing herself at Paul. That a film featuring a graphic torture and several brutal murders can imagine no horror worse than seduction by an attractive middle-aged woman is telling. Evans struggles to make her plays for Paul unpleasant, framing and lighting Phillips to look like a gargoylish hag.

The film’s problems with pacing and tone are exacerbated by its visual ugliness. Shot in digital video then transferred to 35mm film, it looks like a squalid home movie. Interiors are out of focus (this is particularly distracting when they’re intercut with crisply focused exteriors) and the color palette runs to muddy blacks and yellows.

Evans’ first two features are well regarded, and this film’s opening sequence suggests that he has ability. Perhaps The Price of Air is a misstep. Whatever he does next, it will be an improvement.