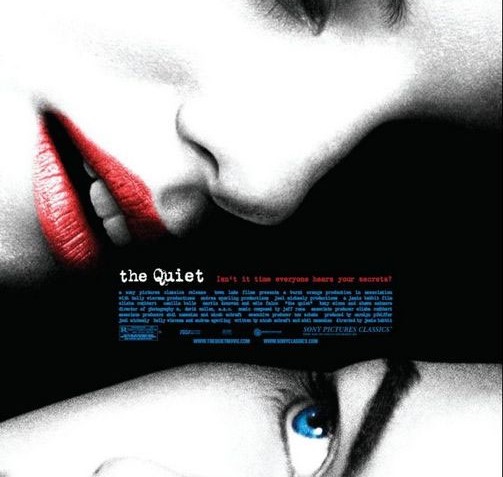 The Quiet is directed by relative newcomer Jamie Babbit, whose first feature film But I&#146;m a Cheerleader gathered critical attention playing at Toronto, Sundance, and other notable festivals. Babbit&#146;s first film became an instant cult camp classic. The Quiet is set among a squad of high-school cheerleaders, and contrasts the shallow, bitchy teenagers&#146; subculture with the far more perverse, yet equally shallow world of adults. Into this stylized suburban Connecticut nightmare arrives an orphaned teenager, the deaf-mute Dot (Camilla Belle).

Despite Babbit&#146;s seeming preoccupation with cheerleaders (featured in her first two feature films in a row) and with careful attention to a sensuous and compassionate lesbian subtext, The Quiet never seems to make up its mind &#150; is it perverse-ironic, it is serious, is it camp? For example, the film is shot in high-definition, creating a notably crisp look. And yet, director of photography David Mullen frequently fills indoor and after-dark scenes with smoke &#150; very moody, very suggestive, and yet often leaving the sloppy impression of a technical after-effect rather than a deliberately sought-after aesthetic effect.

Similarly, Dot is frequently shot playing a piano in her adopted parents&#146; bare dining room. The film offers the alibi that Dot&#146;s adopted mother Olivia (Edie Falco, in a quirky portrayal of a pill-popping mom) is in the middle of a compulsive-obsessive interior-redesigning rage. Yet, the set comes across as a found backdrop, adopted because of its found-object charm. If Dot is deaf, why is she so frequently shown playing Beethoven so emotively on the piano? Is this heavy-handed foreshadowing or camp overstatement? And how come no one ever hears dad having sex with his daughter Nina (Elisha Cuthbert) downstairs, while Dot plays away and mother Olivia "pretends" to hear nothing, upstairs or downstairs? Is there a reason Olivia looks like Annie "Sweet Dreams Are Made of This" Lennox?

The Quiet seems not so much to want it both ways, but rather as unwilling to commit itself one way or the other. It takes on directly poignantly explosive subject matter, the many kept open secrets that bind family and social circles together. It approaches father-daughter incest in a refreshingly direct manner. The parallel of father-daughter secrets, between Nina and her father Paul (Martin Donovan), and Dot and her father (dead more than a decade before the start of the plot), could offer a potentially powerful narrative touch. The multiple reversals of protector/persecutor roles is rife with dramatic possibility. And yet, in the most inappropriate moments, the film slides into archly dark humor, even bombast. The prompted urges to laugh tend less to defuse the sting and more to render banal.

That said, the ensemble cast is thoroughly enjoyable to watch. As Dot&#146;s would-be nemesis and incest victim Elisha Cuthbert as Nina is intriguing. As Nina and Dot&#146;s relationship changes, both appear more radiant, almost a guilty viewer&#146;s pleasure &#150; as they come to terms with each other, they take on a kind of lesbian love halo glow. Shawn Ashmore as Connor works well as a love object, but is not quite plausible as a star player on the nearly all-white high-school basketball team. Katy Mixon, as Nina&#146;s poison-tongued best friend Michelle and chief slut among the cheerleaders is both easy to hate and hard not to feel sorry for. What starts out promisingly enough as a parody of a suburban Connecticut bedroom community, flirts with becoming a serious drama, perhaps high-brow cinema, ends up more like an after-school social issues drama. Jamie Babbit continues to show great promise as a director, and The Quiet may prove an interesting apprentice piece for this director.