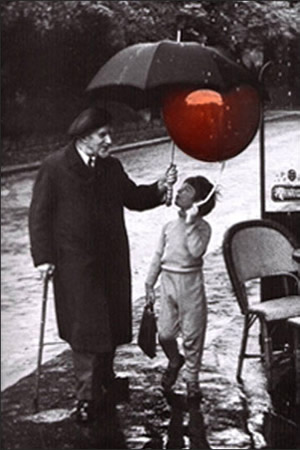 In 1956, a short (only 34 minutes) and almost completely wordless film came out in France, and immediately won the hearts of children and adults around the world. It was the first short film to receive a Palme d’Or at Cannes, and it also earned an Oscar for original screenplay (remarkably, considering its lack of dialogue) the following year. But the true test of its worth is its staying power as one of the best-loved films in cinema history. Now, fifty years later, “The Red Balloon” is being reissued with superbly restored prints by Janus Films, along with “White Mane,” another short film made four years earlier by the same filmmaker, Albert Lamorisse. Landmark Theaters is showing the films in its theaters, and there are other screenings scheduled around the country.

“The Red Balloon” is considered a classic among children’s films, and eventually became standard viewing at elementary schools, not to mention film schools and rep houses, around the world. The fate of the perfectly round red balloon that a Parisian schoolboy finds and befriends has been indelibly engraved in the hearts of millions of people. One person in particular, the Taiwanese filmmaker Hou Hsiao-hsien, even honors the balloon in his latest film, which debuted at the 2007 Cannes Film Festival. “The Flight of the Red Balloon” not only pays tribute to the previous film, but also contemporizes it, giving the iconic red balloon a new life in a new century.

The universal, enduring appeal of “The Red Balloon” stems in part from the simple childlike awe that it evokes. All children can relate to the magic of a helium balloon, and film has the power to anthropomorphize a floating ball in a way that is realistic enough to get even jaded adults convinced that it is alive. Lamorisse’s deftness in filming the red balloon as it interacts with his young friend is one of the film’s wonders. The special effects are extremely sophisticated considering the time this film was made; the red balloon appears to move effortlessly of its own will, and yet stands out with a surreal clarity against the muted landscape of the streets of Paris.

The special effects would be insignificant, however, without the elegant charm of the story they are serving. And the story is captivating in its simplicity and its fullness; it is both funny and sad in a way that transcends time and cultural differences. While an underlying anxiety pervades the movie—it is after all, about a very fragile object—the film is quite funny for the most part. The humor is visual, consisting mostly of sight gags and slapstick routines, carefully crafted with sharply timed entrances and exits of the mischievous balloon. The gags just keep coming, and each one seems to surpass the next in cleverness. My favorite is when the red balloon spots a blue balloon in the hand of a little girl while on a walk with his new friend. The short flirtatious exchange that ensues is priceless.

Although “The Red Balloon” is better known than its companion short, “White Mane,” they are both quite similar stories told with the same poetic spareness, but from very different perspectives, and this is their charm as companion pieces. Lamorisse was a photographer before he became a filmmaker, and both films are beautifully shot. Just as the hilly Menilmontant district of Paris has a bas-relief quality in “The Red Balloon” that adds to the feeling of fantasy and reality intermingling, the endless wetlands of France’s Camargue region—where the land and sea become one—are an intricate part of the story of “White Mane.” Both films have brilliantly choreographed chase scenes, and they both contain amazing footage of the camera following characters as they are running. It feels like we’re running along with them, and the effect is exhilarating.

Both films are also virtually silent, with disarmingly simple stories. They are the same story, really: fables about how innocence is eventually betrayed. They each revolve around a young boy and the curious friendship he develops with a non-human—one with a balloon and the other with a wild horse. And like most fairy tales, the happy ending pasted onto the end of each film is strange comfort after the cruel events within the stories themselves. The idea that these two boys and their non-human friends find a better world to live in may leave children assuaged, but adults will have to settle for a melancholy aftertaste.

“White Mane” deserves some mention on its own for the profound visceral effect of its beauty. Not only is it richly photographed in black and white, the scenes of the horses, especially the magnificent white horse with the long mane of the title, are stunning. There is one long scene of White Mane fighting another white horse that it is absolutely riveting. The battle is so extremely tense, utterly realistic, and physically vicious that it left me drained. It was like a boxing championship—cruel and yet fascinating.

Albert Lamorisse’s two masterpieces should be required viewing for all ages. Pry your children away from their Playstations and their SpongeBob videos and take them to see these extraordinary films. If you don’t have any children, go on your own. There is no age limit to discovering the wondrous effects of Lamorisse’s vivid and boundless imagination.