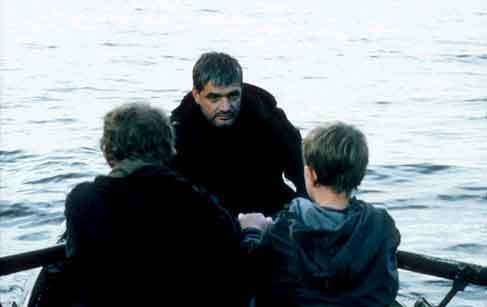 The Return centers on the relationship of a father and his two sons, a recurrent theme in literature, drama and films, one so central to the human experience that each story told has the potential for new insight and variations on these fraught emotional connections. A remarkable first film by Russian director Andrey Zyvaginstev, the screenwriters Vladimir Moiseenko and Alexander Novotsky must be allowed a full measure of credit as well for this subtle, perceptive psychological study. Probably because it was not released in the United.States until February of 2004, The Return stood little chance of winning the Academy Award for best foreign film, for which it was deservedly nominated.

After an absence of twelve years, the father (Konstantin Lavronenko) returns unannounced to his wife and sons. (The absence is never directly explained, but the story allows a reasonably good assumption about where he was.) The wife seems wary and pensive, far from overjoyed at his return. In a telling scene, on the night of his return they sit down to family dinner together and the father immediately assumes a firmly dominant role–he gives the orders and others obey. It’s the Old World European family structure which may remain prevalent in Russia today, but is wrenching to those who have become accustomed to a more contemporary family dynamic.

Father and sons set off for a fishing trip together, driving through a landscape that seems littered with abandoned and graffitied buildings, like some post-apocalyptic wasteland. The father–physically powerful, beetle-browed, taciturn–wants to rekindle a link with his sons. He seems to forget that the younger, Vanya (Ivan Dobranravov), was barely out of infancy when they parted and his brother Andrey (Vladimir Garin) only a year or two older. What bonding may have happened then has long since faded away.

The boys, on the other hand, are torn between the desire to have a father in their lives and their distrust and fear of this virtual stranger who has so suddenly returned, exercising an authoritarian power over them to which they are unaccustomed. Andrey, even after suffering abuse, is the more amenable, while young Vanya, in a classic Oedipal acting out, rebels, setting up a testing of wills between his father and himself. The father, while difficult and awkward in his often inappropriate behaviors towards the boys, is presented as a rounded character, more complex than a merely black-and-white "bad guy." The Return doesn’t settle for simplistic portraits or uni-dimensional emotions.

The screenplay uses an accrual of incidents to build the psychological profile of father and sons and their relationships, never losing its way in an overall narrative structure that sustains dramatic tension well. A few scenes are drawn out somewhat longer than their content requires, but the characterizations have been so incisively established that interest is sustained nonetheless.

The ensemble of performers work together with a naturalistic and convincing realism, but young Dobranravov stands out in a portrayal of heartbreaking transparency, as Vanya’s longings, conflicts and vulnerabilities permeate his every spoken line, facial and body expression, action and reaction.

Against a dark palette almost exclusively of blues and grays, accompanied by a minor-key soundtrack with a vaguely exotic, Eastern mood, director Zyvaginstev keeps his actors in the foreground, revealing character, yet withholding just enough to sustain an air of mystery. The broad theme of abandonment and return, explored in several variations, suggests mythic depths to this story of timeless significance.

(9156)
$6.44 (as of January 24, 2021 - More infoProduct prices and availability are accurate as of the date/time indicated and are subject to change. Any price and availability information displayed on [relevant Amazon Site(s), as applicable] at the time of purchase will apply to the purchase of this product.)

(9752)
$19.99 (as of January 24, 2021 - More infoProduct prices and availability are accurate as of the date/time indicated and are subject to change. Any price and availability information displayed on [relevant Amazon Site(s), as applicable] at the time of purchase will apply to the purchase of this product.)
related posts