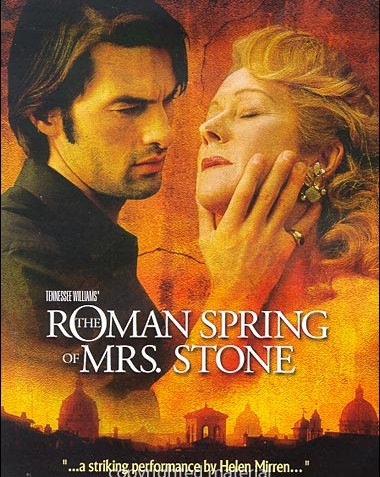 the 1961 film version with Vivien Leigh and Warren Beatty:

The Roman Spring of Mrs. Stone was Tennessee Williams’ only novel, a novella really, short and somewhat sketchy, but steamy with subject matter that Williams made his special terrain: a lonely older woman with a younger man, unrequited love, the seamy side of sexuality, the bitter side of aging and omnipresent reminders of mortality.

The book was made into a film in 1961 with a stellar cast (Vivien Leigh, Warren Beatty, and Lotte Lenya) directed by the great stage director Jose Quintero. It was Quintero’s only big-screen film (he did some television work) and it wasn’t a successful effort, bogged down by stagy directorial style and a screenplay that missed the essence of Williams’ characterizations.

Now Showtime makes its try at filming the book, sparing no expense on location filming, lavish (if often ghastly) costuming, and what seems perfect casting. (No costume seems complete here without a fur; they all look rather fake, but the PETA people will have conniptions.) There are few actresses around more skilled, more subtle, more accomplished than Helen Mirren (Gosford Park, Last Orders). Olivier Martinez (Unfaithful) fits the role of the hot young gigolo as smoothly as the tailored suits that his client buys for him. And Anne Bancroft can be counted on these days to provide the sort of over-the-top performance that just might work for the role of an Italian contessa reduced to the position of procurer for wealthy Americans.

The story is uncomplicated. Karen Stone (Mirren), a star of the Broadway stage, flops as a too-old Juliet and, soon after, her adoring husband suddenly dies. She takes an apartment in Rome, planning to let herself drift for a while. The impecunious Contessa (wearing feathered hats that frame her wrinkled face, making her look like a hawk descending on its prey) introduces her to a series of handsome young men, but Stone knows that this is commerce: "When the time comes I can’t be desired for myself," she says, "I would rather not be desired at all."

But then the Contessa turns up with Conte Paolo di Lio (Martinez) who is clever enough to court her, dominate her a bit, and initiate a steamy affair before ever hitting her up for money. She falls for him and deludes herself into thinking he cares for her. Her mind knows it will end, but she allows her heart to feel otherwise. It inevitably will end badly.

It’s possible to imagine a good movie coming out of this novel, but Showtime’s production fares even more poorly than the earlier version. The screenplay by Martin Sherman (best known for the riveting Bent) lacks both tension and any tone of genuine decadence fitting the circumstances. His Karen Stone is missing the hard edge of a pampered star; she’s too nice to make the turnaround satisfying. There’s plenty of graphic sex (absent from the 1961 version), but it quickly seems redundant. A minor character, a playwright, Christopher, is presumably modeled on Williams himself, but his lines are smug without being witty–Williams surely would have done better. (And the pseudo-fey, southern-accented performance by Roger Allam belongs in some provincial collegiate production.)

Towards the end, the Contessa launches into a bitter anti-American speech, citing the bombing and invasion of Italy by the Americans as the source of her penury. No foundation has been laid for a political angle here, so the speech seems to come out of nowhere. Though it certainly has some resonance at our own moment in history, it falls flat dramatically in the film. And the ultimate resolution of the film, not to be revealed here, makes thematic sense but is thoroughly unbelievable as played.

Williams was a romantic who tempered his art by avoiding sentimentality and elevated his often melodramatic scenarios with flowing, poetic dialogue. There’s no poetry in Sherman’s writing and there’s more than a little cliched sentimentality. The gigolo and his client dancing in a deserted Roman piazza? A good deal of the responsibility falls on director Robert Allan Ackerman who seems not to have had a clue what to do with all the thespian skills provided him. Perhaps dancing in the piazza was his idea, as was surely the overused device of a camera repeatedly circling 360 degrees around a subject. Mirren and Bancroft seem adrift, left to their own devices in a sea of mediocrity. Even great actresses need competent direction.